Mrs. Barbour's Daughters by AJ Taudevin is inspired by a true story around a very real Mrs. Barbour, a Scottish housewife and political activist who invoked change in the early 20th century. Mrs. Barbour is known for gathering women to fight against increased rent, her organized protests quickly leading to the Rent Restriction Act in Europe. Taudevin's story takes place years after, focusing on 87 year old Mary, played by the magnificent Barbara Ellison, who is facing eviction from her building that is set to be demolished. Mrs. Barbour's Daughters uniquely unfolds with flashbacks to Mary's past as songs... 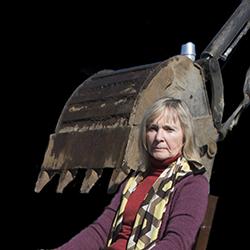 The Metro Vancouver board will be voting Friday, October 30 on whether to send a letter of protest to the premier regarding B.C. arts cuts. If you are in the Metro Vancouver area then we urge you to contact your local members of the Metro board to tell them to support this motion.

You can find a list of Metro board members here.

While the Performing Arts Community takes to the streets in the form of Grey Squares, BC writers are taking more direct action and one that is appropriate to their mode of communication: writing. Forming a Coalition for the Defence of Writing and Publishing in BC, they have started a campaign to send 100 letters to Canada's "most literate premier" (that's Gordon Campbell to you and me).

Here's what the coalition wrote in their press release sent out this morning:

Premier Gordon Campbell is known to be a literate man. He is the only provincial leader who has maintained a personal website about the books he reads.

Campbell’s government has even created a $40,000 national literary prize. Each year he takes the time to personally present B.C.’s National Award for Canadian Non-Fiction at a lavish luncheon at the Pan Pacific Hotel. This award was just raised to $40,000—from $25,000—matching the Ontario-based Griffin Poetry Prize and Scotiabank Giller Prize demonstrating his support for reading and writing.

Therefore three prominent literary arts groups are puzzled as to why provincial funding, which is used to support writers and publishers, was suddenly and completely eliminated by the Arts & Culture sector of the Ministry of Tourism, Culture & the Arts (Hon. Kevin Krueger).

“We know Gordon Campbell is sincere when he voices his hope that British Columbia can be perceived as the most literate place in North America,” says Margaret Reynolds, executive director of the Association of Book Publishers of B.C. “So maybe this is a hasty decision, essentially a mistake, and something he himself regrets. It just doesn’t make a lot of sense, given his principles and even his practice.”

Having formed a Coalition for the Defence of Writing and Publishing in B.C., literary arts groups are sending Premier Campbell 100 letters—the first batch of more to come—to ask him what has happened to his resolve to be a champion of literacy and reading.

“We are asking him to take a personal stand on this provincial issue—not for us, but on behalf of all the British Columbians who want to continue to read and write and publish books and magazines about this province,” says Rhona MacInnes, executive director of the B.C. Association of Magazine Publishers, one of the professional associations that was lambasted by drastic cuts.

The 100 letters sent to Campbell are not just from urbanites who are professionally involved in the province’s threatened publishing industries. They emanate from towns all over the provincial map.

“We have only just begun to write,” says Alan Twigg, publisher of B.C. BookWorld. “I have yet to inform our 100,000 readers what has happened.”

The populist newspaper, with a public service mandate, is supported by Pacific BookWorld News Society and distributed via 900 outlets in B.C., making it Canada’s most-read independent publication about books.

The Coalition’s new slogan KEEP B.C. READING will also be used to promote the stabilization of funding for the B.C. Arts Council whose client arts groups, including writers and publishers, face further provincial cuts.

The Coalition will send another batch of 100 letters in November.

Tomorrow, Wednesday, sees the next stage of the “grey square action” against the proposed cuts to arts funding. Arts groups in Vancouver are planning a city-wide protest (although organizers are claiming that it is not a protest) with art workers and supporters of the arts being asked to dress in grey and move through the downtown core throughout the day in what is being termed a “Grey Relay”.

Protesters - rather, grey square participants - will form a static human square for each leg of the relay and then march in single file to the next designated location. Details of the timetable for the relay and locations can be found here. If you are planning on attending, you’re asked to contact movingjac [at] gmail.com as the logistics of the event are a bit more complicated than an ordinary protest rally.

The final square will take place, rather appropriately, Library Square. According to organizers at 3:00 pm the square must disband and dissolve quickly. According to their dedicated Facebook page, rather than being a protest it's “about art and artists taking their space.”

“We are aiming for a visual of the grey mass of art workers and supporters moving out into different parts of the city, working and making art in and amongst the people. Walk purposefully out into the world and know that you are the glue that holds it together.”

As reported extensively here on PLANK during the summer, arts groups learned of funding cuts to programs run by both BC Gaming and the BC Arts Council with the total in cuts projected at being in excess of 90% by the 2011-2