White Christmas: a celebration of the 1950s 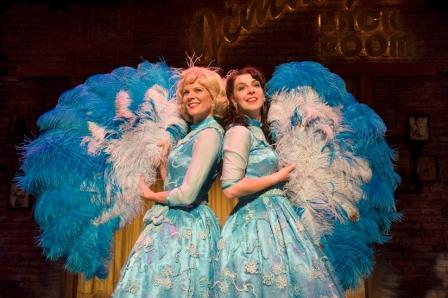 I remember a review for an REM album – I think it might have been for New Adventures in Hi-Fi – where the reviewer started his critique with the following: “You already know whether you’ll like this album or not”.

He was referencing the fact that REM had been (and still is) guilty of producing basically the same album over and over again.

That immortal line rang through my mind as I was watching the Arts Club’s production of White Christmas. Not so much that the Arts Club has fallen into a rut but rather in thinking of you, dear reader, that you already know whether you will like this show or not. There’s nothing I can say here that will persuade you to rush out and buy a ticket or stay away. You already know whether you’ll like it. You already know whether you’ll hate it (or, more accurately, whether it will do nothing for you).  In fact reviewing White Christmas is sort of like trying to eat a rubber egg. You can try attacking it with a knife and fork but it will always bounce back. You can enjoy its shiny surface or pleasing shape but you know that there is little of nutritional value.

There are people who rail against resources and effort being wasted on this sort of product (and this is a product) while others will point to the string of sold out performances the run is already enjoying (including on a miserable Tuesday night when we went) and pull out the “it’s just fun and entertainment” card.  Generally, I fall into the second category. A healthy theatre ecology includes White Christmas and it is in the interest of all of us who love theatre that these productions be done well and please audiences.

So, White Christmas is a hit. Why? I’m not entirely sure. Perhaps because it’s a way for people to kick-start the holiday season; perhaps because it’s a “new” Christmas show for the Arts Club that is a movie-to-stage adaptation with a built-in audience or maybe because it promises us a nostalgic ramble into Christmases past. Not that they are the Christmases most of us have directly experienced, more that we saw them every year on television and they in turn planted longing for a golden past that really belongs to someone else. Take me, for instance, every December I long for crowded Manhattan streets with the snow swirling and people loaded down with boxes, all lit by the light spilling out from elaborate store-window displays. And the one time I did experience this – maybe a dozen years ago – I thought I was in heaven.  But why? I grew up in Vancouver where the two stretches of the city that came close to evoking that urban landscape – Hastings and Granville – have both been destroyed through neglect and poor management.

Assuming that I’m not alone, White Christmas must plug into something deep-rooted in our collective psyche. Even the retro-artwork the Arts Club is using to promote the show – with its red mittens (sans Olympic logo, thankfully) – excites something in us (or me, at least). Despite all this promise of warm hot chocolate and comforting music, there are two rather strange ironies with White Christmas. First, the show is set in the 1950s but nostalgically evokes an earlier time, the 1940s – not the war stuff so much as the manly camaraderie (one of the central stories is of a gruff general not being able to fit back into the home front).  The second irony – perhaps hinted at in the first – is that there isn’t a lot of Christmas in White Christmas. Instead, it’s a sort of a portmanteau containing a series of Irving Berlin songs. most of which have nothing to do with Christmas (Sisters, What Can You Do with a General? and How Deep is the Ocean – stand out as particularly unseasonal).

White Christmas is really an evocation of the 1950s rather than a celebration of Christmas cheer, although it is book-ended with two Christmas celebrations: one in 1944 (with the army in Europe) and the second in 1954 at the “holiday inn”. If my shaky memory serves me right, this is the same structure as the film (I couldn’t find it online to see for myself – although most of the musical numbers are available on YouTube). For some reason the creators of the stage adaptation shoe-horn in even more songs than were in the original screen version (although they wisely left out the Minstrel Number – ah, simpler days). This parade of 23 songs makes the show feel a little long to me but if you like Irving Berlin and especially if you like tap dancing, you’ll probably enjoy this show immensely. If you’re fan of the sort of elaborate sets and stage magic you might expect in an extravaganza like this, you’ll be disappointed by the lack of imagination on display. If you’re a fan of beautiful frocks and sharp-dressed men you’ll leave slack-jawed in amazement. The costumes are spectacularly awful, the women look dreadful and the men look like used-car salesmen. To give you a taste, check out this trailer for the show and go about a third of the way in and look in wonder at what Monique Lund and Sara-Jeanne Hosie have to wear for the Sisters’ number. Immediately after this sequence, Lund appears in what looks like a duvet cover from a Bed and Breakfast in Victoria. Maybe this is how people dressed in the 1950s but I left the theatre wondering whether Lund and Hosie had somehow pissed off Shelia White, the costume designer and she was exacting some sort of revenge. I can think of no other explanation.

Otherwise, the singing is strong – as you’d expect. The leads are good – Todd Talbot as Phil does his cheeky-monkey routine and Jeffery Victor has a nice line in your average Bob, square-jawedness circa 1954. Victor’s also a lot more pleasing than the slightly unsavoury, soft-lit Bing Crosby who played the same character in the movie. The women are a little less successful, although Lund did radiate possessive energy over Phil that could be felt at the back of the stalls and Hosie did have a great duet with Victor (only mildly marred by the slithery “jazz dance” stylings).Although the dance routines are often ropey, there is still energetic, infectious work from the ensemble and lots of great smiles. Rachel Withers – who plays little Susie – is phenomenal in that way that children often are when singing and dancing in front of a sold out house. I did squint a couple of times to make sure she wasn’t a dwarf.

The highlight really is the tap dancing, particularly a skating sequence – towards the end – which is done as tap and is particularly effective.

Overall, I enjoyed it. It went on half an hour too long. I wanted more Christmas and I wanted more magic – but then I seem to often lament the latter with Arts Club shows. If there is one thing we don’t have a shortage of in Vancouver it’s visionary directors who can make real magic happen on small budgets. Maybe some day, one of them will be brought into helm a big musical show at the Arts Club.