Peripeteia - Worth the Search 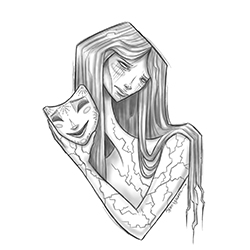 I'm a big fan of the site-specific shows. Since I loved The Elegant Ladies Collective's Eidola (the women from Shakespeare), I was pretty sure I'd like Peripeteia too. And I did.

The Elegant Ladies Collective was founded by Leslie Stark in 2014. For Peripeteia she has pulled together 12 (and this number is important, so pay attention) individual performances of “turning points”, added an opening context builder, a conclusion/epilogue, and a bit of audience participation. You get a variety of performances in a beautiful setting and some things to ponder.

The performances range from opera to improv dance to spoken word. The performers are as young as 16 and as experienced as those who are mothers and grandmothers.

I liked the setting in Ron Basford Park but it does present some challenges for the audience as well as, presumably, the performers, one of whom told me she stepped back when a wedding party was taking photos near her spot.

I was warned that it was hard to find all of the performances so I thought we were prepared. I knew I'd missed one, but as I tried to sort it all out, I think I missed two, so maybe there are 13 performances besides the opening and closing. I'd like more clues on the program of where they are and who's who. Apologizing to Sho Ray Wiley about missing the piece she performs with Sonya Littlejohn, she quipped, “It's about death and suicide. You're lucky you missed it.”

Well, not really. We moved from one to the next but would like to have seen them all.

I recognized our cheerful and charming host, played by Laura Ringwald, from Eidola. This is her third year performing with the Elegant Ladies and she sets the tone for the opening and the epilogue with great energy and charm.

I especially appreciated the spoken word pieces by Laurie-Ann Goodwin and Sofia Waqar. They are positioned right next to each other so do make sure you find them. They're both a little heavy content, so check out Glenna Wong's dance in between if you want.

I don't mind seeing theatre that I don't immediately “get”. How could you be a Fringe lover and expect to get it all? However, some additional clues as to which particular “turning points” are being enacted by which performers would be welcome.

I particularly enjoyed pondering the oddities of site-specific performances on a busy Friday early evening. Here we are listening to a heart-breaking story of a near-fatal car accident and two women at the other end of the bench near the performer just drink their lattes and carry on with their conversation. A skateboarder notices something's going on, so he picks up his board and walks respectfully through the “theatre” before putting it down again. Meanwhile in the background the opera singer is belting out German lyrics which I don't understand at all. On occasion I hear the refrains “Don't call an ambulance” and “Still I can dance” from two performers while I'm primarily attending to another performance. And the couple who were making out on the grass between the walkway and the water are still at it when tea is served at the end.

Fringe vollies! Attention! It's OK that the show started a bit late because of the wedding happening on the hilltop and I know that one of the performers attempts to “clear the site” before the show starts. But we need a Fringe volunteer letting passers-by know there's something going on here. It's not fair to those who paid but more importantly the “drop-ins” are distracting as they discuss what they think is going on and whether they should stay. Very distracting. And since I sighted a Fringe vollie enjoying the show I found myself willing her to intervene.

Not sure still what the title means? I discovered: http://literaryterms.net/peripeteia/

Basically: Go see it. And stay for the tea and cookies provided by David's Tea and the rich conversations provided by the artists.