More Power to Your Knitting, Nell! - Who Knew Knitting Could Be So Romantic? 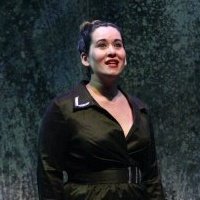 Sadie Goldstein (aka “Knitting Nell”) invites us into her wartime knitting group.  (Got your knitting?  It’s strongly encouraged.  Don’t worry if you can’t bring your own, Sadie may just have a scarf or two in her little basket that you can work on.)

As members of Sadie’s knitting club, we have the good fortune to spend a couple of years with Sadie.  During this time she imparts to us the story of how, with her charming spunk, she came to be known as Knitting Nell - “your favorite gal with the sticks to give you what for with her needles” - by realizing her dream of being a Star on the Radio (much to the chagrin of her mother who would have preferred her to pursue teaching or secretarial - at least until she met a man to marry) and, with her knitting songs, brought joy to the troops and encouragement to the gals waiting at home.

Cute, charming and funny, Melanie Gall is an exuberant performer with a rich, full soprano voice.  Who better to introduce us to these little-known knitting songs?  Upbeat gems such as Listen to the Knocking at the Knitting Club, a cute little ditty about knitting club gossip, delight us, while others, such as the beautiful ballad Soldier Soldier, Dear Unknown, touch us deeply.

Though originally “Nell” hates knitting and doesn’t exactly know what it has to do with the war, one day amongst her fan mail is a letter from a lonely soldier, one with no mother or sister or special girl waiting at home for him.  This is the start of a special relationship and once Nell has her own boy overseas, it all makes sense.  More Power to Your Knitting, Nell!