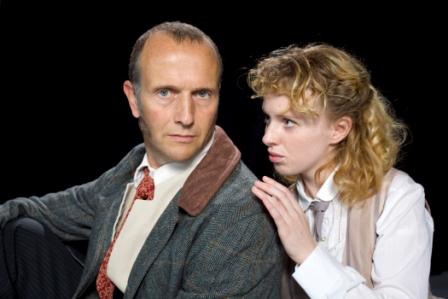 Will you love me forever? The Master Builder, photo credit: Tim Matheson

In his program notes, translator Errol Durbach describes past productions of Henrik Ibsen’s The Master Builder he experienced as an audience member.

He explains how they were made unsatisfactory because of poor castings choices for the key roles of Halvard Solness (The Master Builder) and Hilde Wangel (the steely young thing that promises to be his sexual muse and business manager).

The casting of these roles is crucial to making The Master Builder work on stage. Not only do we have to sense the sexual tension between Solness and Hilde, we also have to believe that together they represent an unusually charged emotional and intellectual fit. Chemically, they form a sort of Bonnie and Clyde of the construction trade: two people who not only inspire one another but also conspire with one another to great, unimaginable deeds that traverse the brick and mortar world of Solness into the fanciful world of Hilde.

Unfortunately, while Durbach has done a, well, masterful job with his new translation – the text feels fresh, vibrant and filled with space for the actors to breathe and explore – this UBC Theatre production seems to have fallen afoul of the same curse that befell those earlier productions. Although we have in Chris Humprheys as Soleness and Fiona Mongilllo as Hilde actors who are the right ages (no 52 year old Hilde here), I’m afraid they are both miscast in their roles and this fatal flaw undoes what could have been an incredible evening of re-discovery of this old play.

Although he looks the part, Humphreys never really connected with me. His performance – particularly in the first half – is too mannered. His character is meant to be burnt out and dissolute; he’s having some form of dalliance with his young secretary, he bullies people to get what he wants but Humphrey never gives any sense of the depths of this individual’s cruelty or weaknesses. Instead, we get a slightly louche chap who, with his rather distended way of articulating his lines, reminded me of Will Arnett’s Gob from Arrested Development. It was hard to believe that any pretty young thing (let alone two of them over ninety minutes) would willingly ruin their lives for this guy.

Although a charismatic, young performer, Mongillo’s portrayal of Hilde put me more in mind of a spirited heroine from a Disney cartoon or improving literature for young people than the dangerous, manipulative and probably damaged Hilde that the script demands. She bounces around with great enthusiasm and we see on her face every thought that processes through her mind. While this is all very appealing, they didn’t feel like the right choices for a character who is able to lure (and largely control) a dissolute, burnt out philanderer. As a dissolute, burnt out philanderer myself, I can certainly see the appeal of a bubbly young thing like Mongillo but I didn’t buy that this was enough to unlock Solness’ desires and fears. Durbach’s take on Ibsen leaves little doubt that we are in territory that is much darker and certainly much deeper in terms of sexual energy and emotional desire. Solness nearly committed statutory rape on Hilde 10 years before (when she was 13) and she has arrived at his doorstep seeking final fulfillment of that early promise: this is much, much more than a simple May-December romance.

Although the production looks great, with set design by Ana Luisa Espinoza Vaca, lighting by Craig Alfredson and period-perfect costumes by Alison Green, I felt that director Gerald Vanderwoude somehow made a few missteps here as well. This is going to sound strange for me to admit, because I love the aesthetic of a bare stage, gorgeous costumes and dramatic lighting (which is what we have here in spades) but somehow this seems completely wrong for The Master Builder or – perhaps more correctly – in this instance wrongly applied.

For me, Ibsen’s work inhabits the interior world of drawing rooms. Structurally this can seem a bit creaky to contemporary eyes and ears as characters often enter and exit, bringing in new information or ideas as if in some sort of dialectical relay. Without a set, these exits and entrances seem even more awkward (and therefore unlikely) and this is further compounded by the long crosses that most of the performers have to make with their comings and goings. It slowed down the forward movement of the piece. Instead of characters being caught in the moment by a door opening, they seem to be standing around waiting for the missus to arrive like a delayed bus.

The interior world of the house is indicated by some very cool lighting effects (floor plans are “drawn” electronically on the stage) and by a big arsed model of a house that Solness is working on. This model sits stage right (be warned, do not sit on that side of the theatre, the model acts like a pillar for the first hour or so and there are long stretches where all you can see is the heads of the performers).  From a practical level, the model seems a strange choice to evoke the interior space as there is so much stage business involving drawings and papers that had to be awkwardly mimed; a desk would have seemed a more effective signifier of this world.

But there is another – far more important – reason why I feel that the lack of set sits uneasily with this play. The Master Builder is an exploration of psychological states and those states need to be grounded (or set in opposition) to a specific context. The erotic co-dependency of Solness and Hilde, their strange tales of creatures and castles in the clouds, even Solness’ struggle with guilt and fear need to be drawn onto a naturalistic canvas otherwise they – and the themes Ibsen is working through so carefully – come across as strangely unmoored.  It felt during some of the passages that we were simply seeing statements of psychological conditions rather than explorations of individual truths for the characters. This sense of unmooring has to do with the production rather than the script, as there is some incredible writing that is as challenging now as it would have been over a century ago.

With the second half of the play, Ibsen moves out of the house and into an exterior space and rather interestingly the production itself moves into a stronger rhythm (although this may also have just been me as the model house was finally moved out of the way of the sightlines on our side of the stage). If my thesis is correct then this ramped up energy may have to do with the fact that Ibsen was also moving thematically out of “the house” and the stripped down aesthetic more easily fitted this section.

There is effective sound deisgn by Cristina Istrate and strong supporting work by Trish Pattenden, as Solness’ long-suffering wife and Nick Fontaine as Solness’ long-suffering apprentice. While this is a production to take in if you’re interested in Ibsen or curious about his later work and although the story is still there to be told, there is not enough darkness in this production to illuminate its depths.

The Master Builder by Henrik Ibsen in a new adaptation by Errol Durbach continues until November 7th at the Telus Studio Theatre, UBC.  A co-production between Theatre at UBC and Yorick Theatre. For more information cast yourself here.