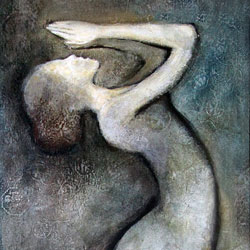 There were ten readers, but no identity was given to any of them. I was looking for characters and 27 different distinct voices with their own stories. I heard out some voices speaking about a still birth in the bath tub, kneecaps in pig manure, pimps and pain, yearnings for love, rape, menstruation blood, and labour pain. But there was no distinction between the events, of what was connected and what was separate. The snippets of words moved through the row of readers in one disconnected jumble of voices, thoughts and noises. Maybe that was on purpose? I hear “it does not matter” from different voices and wonder: should I take this to heart?
The subject matter of missing women, marginalized women, physically, sexually and emotionally abused women (all especially frequent in our aboriginal communities) is a reality and a subject that needs to be spoken and heard. The injustice needs to be stopped. This play as one of the mediums of expression is trying to ‘drum up’ awareness, to be thought provoking

I like the heartbeat of the drum. In some parts of this piece the drums were allowed to give the rhythm and harmony they are designed for. But for most of the play they were used as thunder and discord and often too loud. I guess it was fitting, but hard to hear the words, or have a chance to let the message sink in. The sighing of the women, especially in childbirth, was grating. The violin was worse, like nails on a chalk board. The intention was probably to emphasize the grief, but I just found it annoying and was not able to let the piece touch me. I just wanted it to be over.

Maybe that emotion—just wanting it to be over—also fits the situations these women have experienced; but it is not conducive for finding new audiences to hear and watch the play.