Show Blog: the studio and the swine

We continue our series of show blogs giving us a behind the scenes glimpse of Studio 58's upcoming production of The Winter's Tale. Here Mike Wasko tells us what it feels like to return to Studio and bring the plague with him.

Well, I've been a pretty unreliable blogger so far. It's been busy times down in the Bowels of my old alma mater, Studio 58, where I've been asked back to play the role of Leontes in Shakespeare's The Winter's Tale after graduating ten years ago. Most of my time thus far has been spent convalescing and learning my lines.

The first week sucked cause I had the swine flu. It came on like a freight train and I was fully TAKEN DOWN. But in the theatre you generally have to be bleeding from the eye-sockets, missing a limb or dead to miss rehearsal or a show. It's fucked, I know, but it's born out of the fact that rehearsal time is finite, there's no getting it back once it's gone. And when you're playing one of the central characters many other people are relying on you. Theatre is an ephemeral art form. It's here then it's gone. The show must go on. Anyway, bla bla. So I worked through it.

Let me tell you: Shakespeare and H1N1 do NOT mix. It requires a great deal of concentration. Eventually I lost my voice. The thoughts in Shakespeare can be very long and convoluted. It often takes a great deal of breath and a large tragectory of thought to make your arguments clear. This is difficult when you're feeling great. When you're hacking your guts out, have a chest full of phlegm and a headache in every molocule of your body it makes it all seem a bit impossible. Leontes is a great role - though once he gets going the guy never shuts up. Loss of voice was inevitable. The worst part of it is I brought this pestulance into the cast. Now it's going through like wildfire. Oh well, better now than opening week. It should have run its course through everybody by opening.

Anyway now I feel, as my fellow actor Joy Castro termed it, "like a phoenix rising from the ashes". Flu is gone. Voice and strength have returned and Shakespeare is AWESOME.I feel so honored and lucky to be asked back to the school. It's an incredibly demanding program and I had a devil of a time, at times, when I was a student here. I wasn't always the easiest of students to deal with. The fact that Kathryn Shaw (Artistic Director of Studio 58) trusts me enough to ask me back to do a role like this is hugely validating.

The students are amazing. I really gotta get my A-game going here cause they are a sharp bunch. Lots of fun. I've seen some fantastic work going on. These folks are a pretty tight group. I remember what it was like: they've been shoveling their guts out onto the floor with each other on a daily basis for the last three years; you get to know people in those circumstances. But they've been so welcoming to me. I feel like I'm back in 6th. term. A bit surreal at times.

That's all the news that's fit to print at present. I'd like to leave our readers with a really cool excerpt from a 1987 article from Harper's Magazine that I stumbled upon on the web. It gave me a delicious chill and really sums up some of the darker themes of loss in Winter's Tale. Enjoy.

About forty years ago, in a high-school English class, I learned that talking about literature, like talking about yourself, incurs some small dangers of self-revelation, even though literary talk is distanced by logic and standards of objectivity, and is controlled by good manners–a social activity of nice people.

My teacher’s name was McLean, a thin man with a narrow head and badly scarred tissue about the mouth which was obscured by his mustache. It looked British and military. The scar tissue was plain enough, despite the mustache, like crinkled wrapping paper with a pink sheen.

Listening to him, looking at his face, I heard his voice as crushed; softly crushed by the grief around his mouth and whatever caused it. He’d been in the air force. I supposed it happened during the war; though I couldn’t imagine how.

McLean usually wore an old brown tweed suit and a dull appropriate tie, and he had a gentle, formal manner. Whenever he made some little joke, he chuckled slightly, as though embarrassed, having gone too far, exceeding the propriety of the classroom. Telling jokes, I think, calls attention to your mouth; his for sure. On some days, as if sensitive to weather or nerves, the scar tissue looked raw, hot, incompletely healed.

Long before McLean’s class, I knew the strong effects of stories and poems, but, through him, I discovered you could talk about the effects as if they inhered in the stories and poems, just as his voice inhered in his face. When McLean read poetry aloud, his voice became vibrant and lyrical, and the air of the room was full of pleasure, feeling its way into me with my very breathing. Reading alone or being read to was always an anxious sort of happiness. I knew that I’d never recover from its effects, since they only deepened my need for more.

One afternoon, discussing The Winter’s Tale, McLean came to a passage I didn’t like. I worried if it might be deeply good Shakespearean stuff, beyond me to know how good. In the passage, Paulina and Dion debate whether or not King Leontes should remarry. Years have passed since Leontes practically murdered the former queen, Hermione. Paulina says to Dion, “You are one of those/ Would have him wed again.” Dion then makes a complicated reply:

If you would not so,
You pity not the state nor the remembrance
of his most sovereign name, consider little
What dangers, by his highness fail of issue,
May drop upon the kingdom and devour
Incertain lookers on. What were more holy
Than to rejoice the former queen is well?
What holier than, for royalty’s repair,
For present comfort and for future good,
To bless the bed of majesty again
With a sweet fellow to’t!

McLean relished the little paradoxes. First, his “fail of issue/ May drop … ” That is, failing to drop–or produce–a child, drops problems on Leontes’s kingdom. Second, “to rejoice the former queen”–poor dead Hermione–”is well.”; The queen is dead, long live the queen. All in all, Dion’s speech has, the dead queen alive, blessing “the bed of majesty again,” in another woman’s body, which will make “a sweet fellow to’t.”

The last line, ending “to’t,” like bird belching rather than tweeting, struck me as disgusting, and the whole speech, conflating a real dead woman and an imagined living one, was very creepy. I raised my hand. McLean glanced at me. I said, “Necrophilia.”

McLean asked me to stay after class and then went on, enraptured by the moment when Hermione steps out of the stone statue of herself and back into the living world. Leontes, much older now than the long dead Hermione–their daughter being grown up and marriageable–can look forward to going to bed with Hermione again, making love to her. The prospect seemed ghoulish to me. Old Evil eating Innocence, as in a black vision of Goya. I wouldn’t accept the idea of her statue showing her as aged. I wouldn’t see it. I couldn’t.

After class, everyone but McLean and me left the room. I went up to his desk. He fooled with his papers, as if he didn’t notice me standing there, and I seemed to wait a long time. Of course he couldn’t simply turn to me and say what was on his mind. Too direct. Not his style. So he collected papers, ordered them, collecting himself, I suppose.

I was scared. I was always scared, but especially now. Not being a good student, I didn’t feel morally privileged to receive McLean’s attention–alone; this close. It was always hard for me even to raise my hand amid the pool of heads, then speak, then survive the pressure of McLean’s response, though he was gentle and careful, never making anyone feel impertinent or stupid. I’d raise my hand very rarely, and then I’d go deaf when McLean responded, and I’d sit nodding like a fool, understanding nothing, the blood so noisy in my head and my tie jumping to my heartbeat. Though barely perceptible, it could be seen.

Still looking at his papers, McLean said, “Some people make a practice of burying their dead quickly and getting on with life.” My people, presumably. I didn’t know why he said that, but I took the distinction without resentment. There was nothing pejorative in his tone. He was merely thinking out loud, unable to talk to me otherwise, perhaps too embarrassed by what he wanted to say, or else by his inability to say it. Then he said, “I was a ball-turret gunner,” and–I suddenly understood–he was telling me a story.

Ball-turret gunners, in the belly of a B-17, the most vulnerable part, were frequently killed. McLean said he would become terrified in action, and he’d spin and spin the turret, firing constantly, even if the German fighter planes were out of range. He gazed at me now, but his eyes weren’t engaging mine, perhaps seeing a vast and lethal sky, the earth whirling below in flames.

On his last mission, he said, he was ordered to replace the side gunner of another B-17 who had been killed. It was the worst mission of all. The B-17 was hit repeatedly and lost an engine and the landing gear was destroyed. It was going to crash land on its belly. The man in the ball turret had to get out quickly, but there was mangled steel above him. He couldn’t move; he was trapped. As they went down, McLean bent over him. He looked up at McLean. “His eyes were big,” said McLean. “Big.”

I felt myself plummet through the dark well of my body. McLean watched me, his eyes big, big, like the man in the ball turret. In that moment of utter horror, he whispered, “It’s a great play, The Winter’s Tale. Can you believe me?”

For more from Leonard Michaels and Harpers check this out. 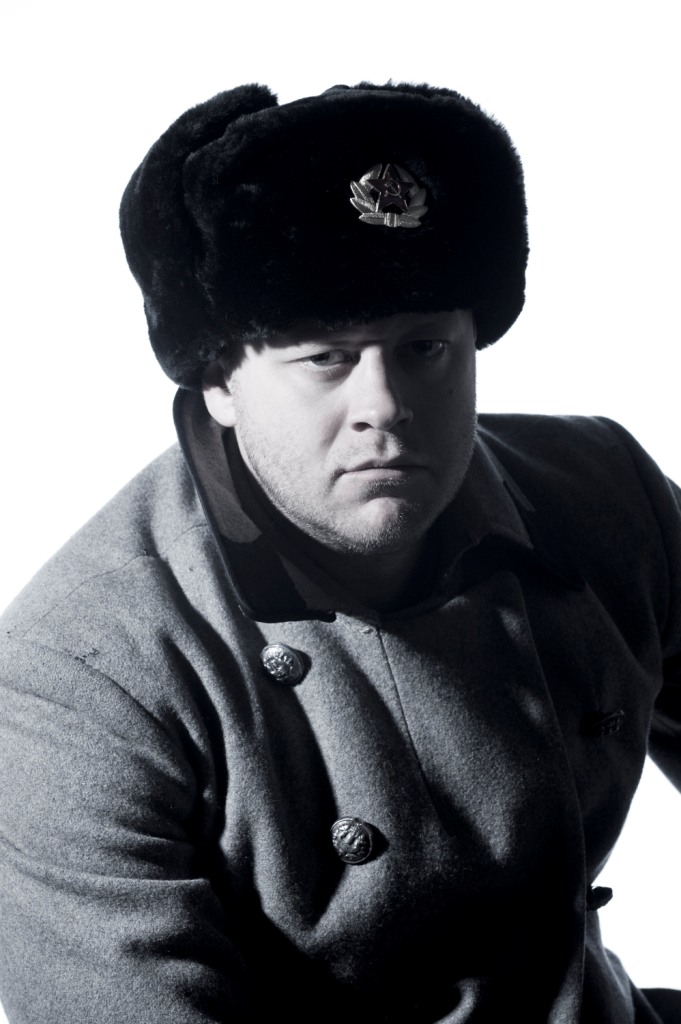