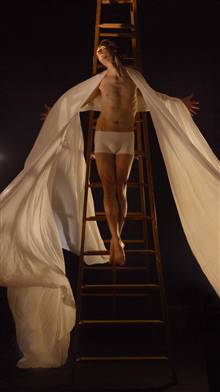 Whetstone Productions doesn’t produce a work of theatre often . . .  once every few years, at best. Wingéd, the one-man show in three acts, written and performed by David Tomlinson, is worth the wait. Its quality is uneven –petering off in the end, but the first two acts are strong enough to make the audience forgive the short third act. Inside the DeLeon White Gallery, the space only seats about 50. The intimate setting allows Tomlinson to address audience members as friends or colleagues. Surrounding paintings and sculptures on display, video screens overhead and a strobe light mark the play as a multimedia endeavour worth seeing.

Act I, entitled Sunstroke: Icarus Speaks, is a retelling of the famous myth. Playing Icarus, Tomlinson tells the audience – as though we were falling beside him – how he wound up in such a predicament: “I am alone on fire falling into the sea.” In his story, the son allowed his inventor father to sew wings into the skin of his back, half for his father’s attention and affection, half to get away from him. He flies into the sun to steal a piece of it and bring it back to his lover as a please-forgive-me gift. Then to punish Icarus for trespassing, the gods set him on fire. His wings melt, and he tells us his story as he plummets into the sea.

Originally performed in Rhubarb! in 2006, “Sunstroke” is the strongest of the three acts. In it, Tomlinson seems to feel at home in the character he wrote – a boy struggling for his father’s approval, a lover fighting to win back what was lost, a man about to die, just when he thought he’d achieved what he wanted. He tells us what his father, Dedalus, always told him: “It is with one sweeping decision you alter your life and follow your heart.” As he plummets, he sings “Downtown” with such poignancy, you think you really are losing a friend.

In Act II, Red Eye Open: The Lucifer Illuminations, Tomlinson is Lucifer, the Morning Star who was banished from Heaven in the Bible. Tomlinson’s character is a visionary, the most ambitious and charismatic of angels, who is determined to make the world better, even from Hell. He’s exiled with a band of followers – the audience. Almost like a discarded lover, Lucifer tries to convince God or Satan or whomever will join him that human beings need enlightenment. They need someone to explain the mysteries of God, no obscurity or paradoxes. Then, Lucifer watches as God sends a son to do just that – and human beings kill God’s son. Lucifer reaches out to God again and again, even in his darkest moments, and we watch how the effort changes him.

“Red Eye Open” is a bold venture, reinventing a story steeped in religion. The themes are the same, only this time the protagonist isn’t lost to death. Rather, his character succumbs to the beatings of rejection, disappointment and finally bitterness.

I honestly don’t know what happens in Act III. The writing is a little too obtuse to tell. Abstract poetry weaves in and out of the story – which is, loosely speaking, the death and presumably resurrection of the phoenix. However, it continues the themes of the first two acts: loneliness and the brutal things we do to those we love. “The heart has to be bigger than the sum of experience,” says the Phoenix. “One must be braver than the storm is bad.”

Wingéd is about choices, about the courage we must muster for the sake of love, and the way it can batter us. “Be brave,” the Phoenix demands. “You are the makers of myth, the architects of experience.” Sure, the cheesy music swells after that, and the protagonist twirls in place as God finds him. (Think air quotes.) However, Tomlinson’s insight into the damage love inflicts is piercing enough to mitigate the faults in his work.

Wingéd produced by Whestone Productions continues until May 8, 2010 at the DeLeon White Gallery in Toronto for more information go here. Unfortunately the Whetstone website is currently down so we can't link to it (insert sad-face here). We'll update if and when we know they're back online.