Til Death: The Six Wives of Henry VIII - A One Woman Wonder! 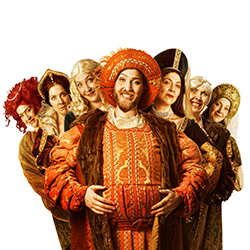 Honestly, I was a bit disappointed when I realized that each of Henry’s wives were going to be played by the same actor. One of the things I look forward to in theatre, especially in period pieces, is the costumes. With one woman in one costume I could tell this wasn’t going to be a “costume drama”. So with the revelation that Til Death: The Six Wives of Henry VIII was a one-woman show, aka, a one costume show, I prepared for an attire-less evening.

Presented by Monster Theatre at the Rio Theatre, Til Death: The Six Wives of Henry VIII, is the story of all of Henry’s wives in purgatory. Each wife falls into the afterlife to wait until Henry can join them and decide which of his wives will be the one to spend eternity with him. Tara Travis mimes holding Anne Boleyn’s head as she acts out all of the ladies bickering and quarrelling as to who is the rightful wife of Henry VIII. She jumps in and out of each character so rapidly that you don’t even realize that it is only one woman acting out a conversation between six characters. Tara Travis really does an amazing job!

Written and directed by Canadian playwright Ryan Gladstone, Til Death: The Six Wives of Henry VIII has three main parts, beginning with the introduction of Henry’s six wives comically landing in purgatory. The majority of the play is spent, amid several interruptions, with the ladies sharing their story about their time being Henry’s wife. After an educational hour in the most comical re-telling of this history, the third part of the play ends with the arrival of Henry himself.

Ending on a strong feminist note this is a truly comical and entertaining hour; I had never before experienced a one-woman show but I would definitely recommend this one. Tara Travis does excellent voices and seems to have limitless energy to pour out into her characters.