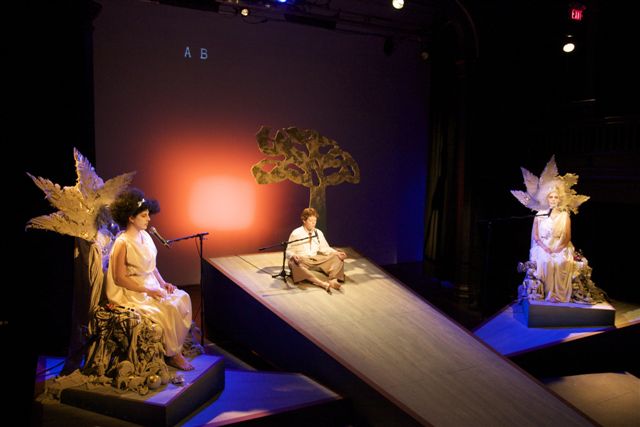 One Little Goat Theatre Company continues its tradition of contemporary poetic theatre in its most recent project Talking Masks.

Written and directed by company founder and artistic director Adam Seelig, Masks is a fusion of Sophocles’ Oedipus Rex and the Biblical and Koranic tales of Isaac and Ishmael. Shared themes of fate and family are woven together through rhythmic verse as the Son, a fusion of all three titular characters, is pulled and prodded by a pair of mothers and a mysterious stranger.

Although the production promises to provide a ‘stimulating introduction’ to its source material for those unfamiliar, I wouldn’t recommend it as a substitute for Cliff Notes. Seelig eschews any elements of the classical narratives – or any narrative at all – in favour of pure lyricism. Oedipal undertones are primarily visible through surges of Freudian Theory, while the fated half-brothers lend from their tale an anxious exploration of circumcision. Luckily the heavy material stops short of taking itself too seriously with regular sidenotes of humour, especially evident in the work’s subtitle, Oedipussy.

The dialogue interweaves, overlaps and is projected in pieces upon a backdrop screen to create a fervent rhythm throughout the performance. Seelig utilizes a ‘plugged-in’ approach that places all four characters on microphones; a seemingly unnecessary convention given the intimacy of the space, but one that lends depth when characters alternate between recorded and off-record dialogue. The energy of this carefully crafted soundscape is interrupted by one overambitious trick; equipment to record and loop bits of dialogue is built into on-stage props, and the effort of performers to manipulate the devices proves more distracting than novel.

Richard Harte’s youthful face makes him a spot-on fit as the Son, alternating between different developmental stages from petulant infancy to obedient childhood to rebellious youth. Richard’s penile obsession and castration fear make him a Freudian poster boy, and he captures the paternal aggression and maternal lust of Oedipus with eerie accuracy. Tied to his mark center stage, Harte’s helplessness and impotent rage are only undercut by the difficulty in telling when – and if – he’s meant to be growing as a character or switching between different roles.

Andrew Moodie has a woefully short appearance as the Man on Horse, a traveling performer who heckles and advises the Son in the first act. Moodie’s character stands in for an absent father figure with dominating bravado, though his relatively brief contribution left me wishing he’d been given a juicier role as a more literal Laius/Abraham homage. Not to dip into cliché, but Moodie has the stage presence that could make reading the phone book enthralling.

Jane Miller and Cathy Murphy round out the cast’s symmetry as the Son’s two mothers, ostensibly as analogues for Sarah and Hagar, with a bit of Jocasta split between them. Posted as pillars on either side of their Son, their suffocating maternal voices and volley of coddling replicate a sense of smothering fate, but otherwise they aren’t given much to do beside showcase Jackie Chau’s powdered Victorian-style costumes.

Speaking of Set and Costume Designer Chau, she deserves recognition for her four point stage. The four-point sloped catwalk created an engaging space, bisecting the audience and creating a sense of symmetry. Although ostensibly a crossroads, the paths are barred in each direction by authority, and the downward slant conjures a sense of fatefulness and inevitability. The only Achilles heel of the layout lays in the unfortunate inaccessibility of the space; the remaining access alley is so thin an audience bottleneck becomes unavoidable.

Seelig and company have stayed true to their progressive, poetic mandate, though as with anything that boasts those two P’s, it should be approached with a grain of salt. There is no escapism in storytelling here, classical or otherwise, but if you don’t mind bringing a keen ear and an open mind, then you can discover an unconventional exploration of a couple of mankind’s oldest parables.