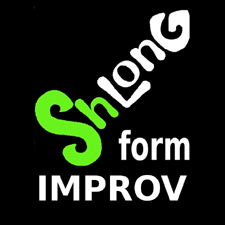 I’m a fan of improv. I even took an improv class twice down at Granville Island. I wasn’t very good at it, which only made me even more jealous of those who could do it well. Coming up with ideas instantly and running with them in ways that aren’t merely amusing, but actually entertaining, is a tough skill to master.

Here’s the problem I have with ShLong Form: there’s no theme to the show. Four very likeable and talented improv artists come out on stage and engage the audience to prompt them with names, locations or other phrases that will get them to work their magic.

They do it well. They’re clearly a team that enjoys working together. It’s fun. It’s funny. But is it a show?

I’m not saying improv can’t be a show. I’ve seen improv shows at Granville Island that were almost totally different each night, but they had a theme. The Theatre Sports crowd puts on shows based on popular movies and TV shows. So even if I have no idea what I’m about to see, I sort of do have an idea of what I’m about to see.

I’m going to see improv with a “mystery” theme. Or an “adventure” theme. Or a “Donald Trump’s sycophantic bitches” theme. Even though the improv is all, well, improvisational, I feel like I’ve seen a show.

I can already here the Drama majors circling. “How do you know what a show is? You think you’re the boss of us? What made you king that you could decide what is a legitimate show and what isn’t?”

Fine. But as a reviewer, I’m kind of stuck. How was the acting? Hell, I don’t know. They didn’t have to remember any lines. You want to know what I though of the show, so that you can plan whether to see it or not? Well, your experience will be completely different from mine, so I can’t tell you. Even if they have an off performance, how the hell would you be able to tell?

Ah, what the hell. If you’re looking for random funny awesomeness, go and see ShLong Form. I’m done with this. I have to go rescue a dolphin in the Antarctica from a very dangerous spelling bee.