Raven for a Lark: a shattering exploration 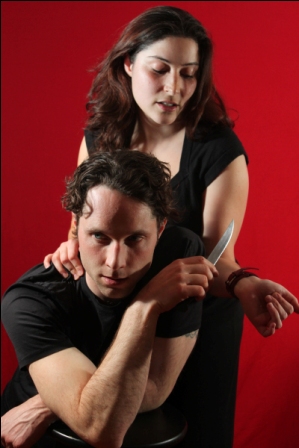 raven for a lark

Raven for a Lark, the dark, two-person drama by Elise Newman presented by quoi quoi quoi, is stirring, disturbing and deeply effective. In it, two actors play two actors talking about their opening night in Titus Andronicus. Of all Shakespeare’s tragedies, this one is generally agreed to be his most violent work.

Two minor characters from Titus Andronicus form the inspiration for the leading characters of Raven for a Lark. Shelley Liebembuk plays the dedicated, naïve and slightly emo actress Nina, who plays Titus’ much violated daughter, Lavinia. Adam Bradley plays the deceptively complex actor Charlie, who plays Chiron. In Shakespeare’s bloody drama, Chiron rapes Lavinia, then he and his brother cut off her hands and rip out her tongue so that she can’t expose them. That’s the scene that Nina and Charlie go over and over, discovering it as actors and as human beings in Raven for a Lark.

Newman’s script is by turns comically quirky and deeply disturbing. It reveals something of the experience of acting, of finding the truth in a part. It also reveals the hidden aspects of people – how they deceive each other and stumble upon their most visceral instincts. It begins as a touching script about two people, their relationships with each other, themselves and their craft. It becomes a shattering exploration of character. What’s at the core of a person may surprise everyone, the people closest to him and the individual himself.

Above everything else in this Fringe, see Raven for a Lark; but, be prepared for the rough side of people.

Raven for a Lark is part of this year's Toronto Fringe Festival and runs until July 11. For more information go here.