The Plank Panel take on the Project 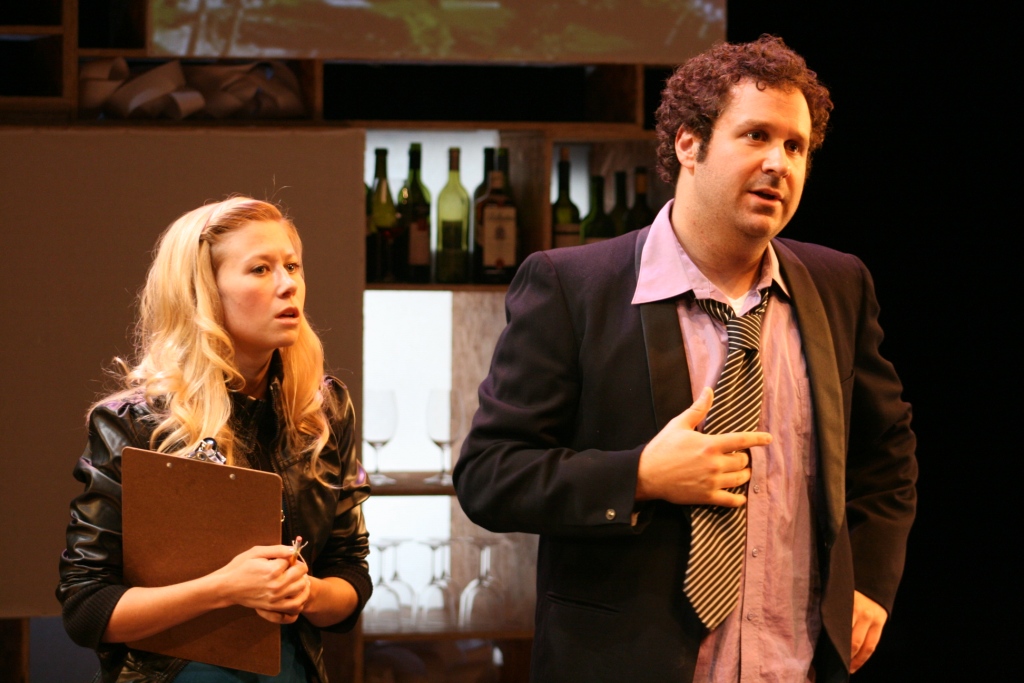 Lindsey Angell and Andrew McNee working on The Project

Andrew: In his latest piece, Aaron Bushkowsky attempts one of the holy grails in playwriting:  to create a play that features a cast of irredeemable characters with whom it is impossible for the audience to have a proper emotional investment. Without the usual emotional narratives to build on, the playwright must use compelling situations and characters who intrigue us not through compassion but through (usually horrified) interest.

With The Project, Bushkowsky has almost pulled off this near impossible trick. The first half of the play sizzles along hilariously with grotesque self-centered characters and a situation that pulls us right in. Fred (Andrew McNee) is a film producer who is developing a documentary about an African country with his young co-producer/assistant/coffee fetcher Leah (Lindsey Angell). The project is fronted by his (maybe ex) romantic partner, Sophie, a high-maintenance, in decline diva (played with great joy by Sarah Rodgers).  We are introduced to George (Alvin Sanders), their contact/liaison in the country in question and Yuki (Maiko Bee Yamamoto) who represents the high-tech company who is sponsoring the project. The play spins out from the basic premise of the hypocrisy of Hollywood North types “doing good” with the second half landing us into a situation where the characters find themselves in a real world with real conflict and where George and Yuki reveal that they aren’t quite whom they appear to be. Once we were in the hostage situation, I found the play to be less compelling. What did you think?

Kirstie: I agree that the play changed tone after intermission.  The Project was wickedly funny in the first half and although I'm a pretty tough audience I was laughing out loud in places.  I think that the characters were actually all the more endearing for their foibles.  Bushkowsky is spot-on in how he caricatured the various types: Leah is a dizzy blond with a heart-of-kevlar and a gift of politically inappropriate utterances; Sophie as you say is a waning diva; and Fred is a fast-talking egotistical film producer whose speech is littered with buzz words. The characters are morally bankrupt but nonetheless multi-faceted, and I think it takes skill to create a well-rounded cast of villains.

I actually found George to be one of the more interesting characters: as an African politician with a Western education, he comes across early in the play as a corrupt and ineffectual figure – as he says, “I am just a petty bureaucrat looking for a bribe, like everyone else.”  But even so, he is somehow more authentic than the shallow show biz types who are trying to take advantage of him.  On the whole I was impressed with Bushkowsky's characters: they all had evident back-story, and their narcissistic posturing was grounded in tropes and fads of the real world.

Andrew: The strengths of the piece definitely rests in the humour and the characters (even if they are not the types you’d want to have over for dinner) supported by a uniformly strong cast. As a regular theatre goer in Vancouver, it was a thrill to watch actors delivering a literate, intelligent script by someone who knows how to write.

You’re right, within the context of this world, George is the most “authentic”.  I was relieved to discover that he wasn’t going to be simply a sympathetic foil to the Hollywood sharks/stand-in for suffering Africa. Bushkowsky is too intelligent to fall into such a basic (and basically false) dialectic. However, I think it is the George character, along with Yuki, that leads The Project into an awkward structure for the second half which is divided between direct to audience monologues, a sequence involving Sophie and Leah trying to make a trailer and George, Yuki and Fred negotiating a deal to save the project. It was this third element that I struggled most with. There seemed to be too many ideas coming into the mix – including Christian and Muslim fundamentalism – and the sharp focus of the first half was, for me, blunted. It was almost as if by introducing the “real world” problems of Africa and international politics that Bushkowsky felt honour-bound to explore these issues but unfortunately it watered things down.

The first half includes many laugh out loud moments, such as Sophie looking out the window into another apartment where a couple are feeding, at the table, their Labrador dog and saying wistfully to Fred: “we could have had that” or Leah saying how she was inspired by Fred’s early documentary on “those poor, wet people”.

Kirstie: George's character arc was the most interesting aspect of Act Two for me.  He is transformed from a suit-wearing paper-pusher into a ruthless gun-wielding rebel.  I liked this twist for the way that “the hunter became the hunted” so to speak – the film exec's started out trying to con him out of his home and patronized him at every turn, talking of “your people” and “that backward country.” Yet in Act Two, George has proved that he is as two-faced and manipulative as Fred and Co.  In the larger framework of the play, it's an object lesson for Westerners who think that they are inherently sophisticated in comparison to the rest of the world.  I would have been satisfied to be left with that message.  However, as Act Two develops, George's character morphs again, and the hostage-taking is positioned as a political manoeuvre calculated to lead him to power and save his people.  Fred, as fickle as ever, becomes enamoured with the idea of supporting George's political PR campaign through his documentary. All of this interested me insofar as it explored the idea that politics and film are all about endless spin.  I was less comfortable with the suggestion that George might be taken at face value as a hero.  That seemed like an easy way out of an otherwise complex scenario.

Other characters' monologues took an existential turn that was out of step with the earlier tone of the play: Leah stands at a podium to receive an award, and asks “who am I?” with a seriousness that is unexpected.  The question and the way that she asked it seemed too large for the context.  Yuki, the kidnapped evangelist, speaks of larger themes of human connectedness as she tries to convince George to let her go.  The questions that she raises are very much at the heart of the play – in a global culture we are connected by commerce as much as ideology – but her tone seemed a little off: more of pithy dialogue from Act One might have leavened the earnest quality of her speeches.  She came across as the genuine article rather than a satirical version of herself.

Andrew: I think you’ve done a great job of articulating how George and Yuki operate thematically within the piece. Picking up on what you were saying, my problem with their characters is that their situations are more in the realm of what I would call literary rather than dramatic ideas. They are interesting ideas to reflect on but do not necessarily feel purely dramatic, at least within the context of this play, where they feel as if they are diffusing from what I see as the core themes.  Even if they raise relevant questions, I feel we’ve tracked too far from the heart of the work.

Wow, we’ve got this far without mentioning the design team – which did a great job. The set by Yvan Morissette looked appropriately cool and sophisticated with half a dozen screens discreetly built in to receive some cool projection work by Jamie Nesbitt. Rachel Peake’s direction is also sharp, providing a great platform for the talented cast to do their stuff and showcase Bushkowsky’s words.

Kirstie:  Agreed – the set was put to very good use.  Projected elements were key to the story, and they added depth without ever becoming distracting.  The various aspects of The Project, from staging to performance, fit together seamlessly.  A pleasure to watch.

The Project continues until November 14th at Performance Works on Granville Island. For more information shoot yourself here.