The Physicists: intriguing but more theoretical than entertaining 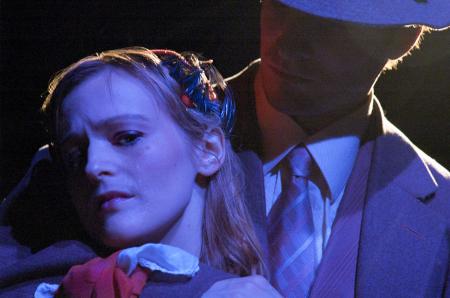 Kathleen Pollard and Uriah Field in Genus Theatre's production of The Physicists...

Genus Theatre’s production of The Physicists is a satirical intrigue set in the common room of an opulent insane asylum called La Cerisiers.

The three patients are all physicists that have been brought together under the care of Dr. Matilde von Zahnd (Kelly Sheridan), a famous psychiatrist with her own dubious mental history.

The patients are Johann Wilhelm Mobius (Frano Marsic), a brilliant physicist with visions of King Solomon, Herbert Goerg Beutler (Jordan Bodiguel), who believes that he is Isaac Newton, and Ernst Heinrich Ernesti (Simon Driver), who claims to be Albert Einstein.  The play opens with the murder of one of the nurses and it is soon revealed that this is the second “accident” to have occurred in the last three months.  Although the murders are quickly attributed to the patients, this is only the tip of the mystery iceberg at La Cerisiers.  As layers of deception are stripped away, no one is what they seem.

Playwright Friedrich Durrenmatt is a proponent of epic theatre, which asks the audience to engage in the theoretical arguments of the play.  In The Physicists, Durrenmatt explores the responsibility that scientists play in a post World War II world, where technology has the capacity to destroy civilization on a massive scale.  Although these are great issues to explore, Durrenmatt’s text has a tendency to get long-winded and didactic.  The inherent entertainment value of meeting characters who think they are Newton and Einstein  - though rich at first - wears thin after the first act.

However, despite these good efforts, the production becomes slow and bogged down - particularly in the second act. With few exceptions, the acting isn’t energetic and outrageous enough to counteract the heaviness of the text. The actors need to rise to the occasion and match the play’s calling for theatrical absurdity. Instead, they seem to decline into realism. Marsic, Bodiguel and Uriah Field (Mrs. Rose) in particular seem to settle into rather cinematic acting.  While the groundwork is obviously there, their performances don’t have quite enough lift off to keep the play afloat.

Although a solid effort from Genus Theatre, The Physicists could benefit from the classic note: “louder, faster, funnier!”  I’d love to see this production pull out all the stops and dare to be bigger and crazier.  A little more zeal, a little more danger, and the show would hold its own.

The Physicists; Produced by Genus Theatre; Written by Friedrich Durrenmatt; Directed by Nicole DesLauriers; PAL Theatre, November 12-21st. For more information you, in theory, could go here. But will you really be there or will you still be where you are?