The Passion Project: a gallery installation 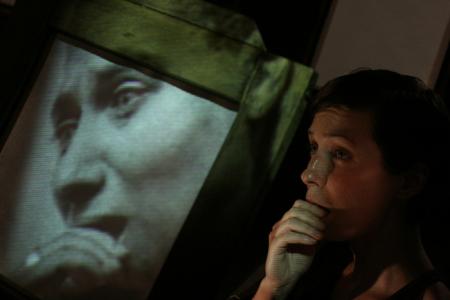 It has basically been turned into a gallery installation with a square, 10 x 10 foot wooden structure in the middle of the space. This structure forms the frame of a cube with ropes and hooks hanging off it, evoking nooses and scaffolding. Inside the cube, propped up on stands, are a series of small frames with screens stretched across them. Across the two walls of the playing space there are large squares of fabric which later act as screens (Pacific is an alley theatre, so the other two walls are taken up with seating for the audience; the majority of which was draped over for this production).

The sense of a gallery space is further evoked by the way that the audience enters. Instead of through the usual doors – which are behind the seats and set above the space – they come through the actors’ entrance straight onto the floor. I’m taking some time to describe the setting because so much of The Passion Project, presented by the PuSh Festival in partnership with Pacific Theatre, is about the space created and the framing structures it contains. There was a sense – for me at least – that this was a thought-through environment. Nothing felt haphazard, from the way a small hook hung off the structure, to the way the frames were lined up on the floor.

In the artist talkback afterwards, this sense of careful consideration was confirmed when creator Reid Farrington explained how, when he was creating the work, he lived with the structure in his loft-space in Brooklyn. Vancouver, certainly in the performing arts at least, is a city that prizes the spontaneous and improvised over the thought-through. I think in part this is simply a collective reality of living here at this time – this is what people are into – but I suspect it is also a reflection on the general lack of resources that are available to create work in Vancouver. I don’t know if Farrington has resources but he certainly has given time to this work and the sense of living with this project is self-evident as soon as you walk onto the floor.

What is interesting about taking in The Passion Project within the context of a performing arts festival (and within a theatre space) is that the work exists much more within the realm of the visual arts than the performing arts. There is a performer, Laura K. Nicoll, and there is Farringdon like a puppet master working at his computers, but what excites about The Passion Project is not the performance per se but rather the experience and the way the space is utilized. Audience members are encouraged to walk around the space to see the production from different angles.

Farrington has taken Carl Dreyer’s silent film of 1928, The Passion of Joan of Arc and compressed it into a 30 minute presentation. It operates like a collage, with Nicoll moving the frames around the space in order to capture the images which are projected from a number of different sources. The frames are variously hung off the wooden structure or carried in sequence by Nicoll as the narrative of the film runs at different times in different locations. In the main the images projected are those of faces, mostly Joan (played by Maria Falconetti) and her accusers (the movie itself focuses on her trial). At the same time, text is projected across the wooden frame or the floor of the playing space. Added to this, is a collage of music and voices (we learned later that the voices were in fact Farrington talking to an expert about the film itself).

As with the recorded conversation, which is so fragmented and drowned out that it is impossible to follow, meaning is elusive in this work. Although Nicoll gives a committed performance, her basic job is to move the frames around the space. This puts her movements in service of the machinery of the project rather than in the process of telling a story as we’re used to understanding it in dance or theatre. She does have a few moments where she breaks free of her obligations by smashing the frames or stepping outside the boxed in playing space. Sometimes these movements are a little too on the nose – she is responding to something happening in the narrative of the film – while other times it is as if she is responding to her job of remembering all those movement cues. There is an interesting inter-play between the (female) performer in service to the art-machine and Joan of Arc’s story – and it is nice to see the physicality of a performer as talented as Nicoll up close against the abstracted imagery – but this isn’t a particularly profound idea.

In a sense, that is what I came away from The Passion Project with: this was a layered, complicated – indeed thought-through - piece that didn’t have a particularly profound message at its core.  One of the stated objectives of the work is that we would be thrust inside the film but we weren’t really, we were sitting outside the frame, even as we moved around the space. I wondered whether during the original New York production the four walls of a gallery space were used rather than the two utilized here and perhaps that immersive element was missing from this particular presentation.

There is a final, and perhaps unintended, layer at work with this presentation. Although I’m not sure how interested Farrington is in the original story of Joan of Arc and the relationship between her passion and that of Christ’s, the work was brought to Vancouver by Ron Reed of Pacific Theatre. Pacific is a Christian theatre and frequently programs work that explores issues of spirituality and belief. Just as I think this is a work that will speak to an audience versed in the visual arts; I also think it is a work that will resonate with those immersed in Christianity and its imagery. Easily the most striking moment of the evening (and the most theatrical) is when Nicoll gathers all the screens together into a column, securing them with ropes. It echoes Joan’s experience of being prepared for the fire that will consume her body (and by using the frames further echoes the experience that Dreyer had with the prints of his original film going up in flames). It is hard to escape this resonance of a martyr’s death in a Christian theatre that is itself in the basement of a church: a church which, no doubt, contains images of Christ’s own passion.

The Passion Project, presented by the PuSh Festival and Pacific Theatre continues until Feb 6. For more information go here.