The Open Spaces Project: an evolving community of movers and watchers 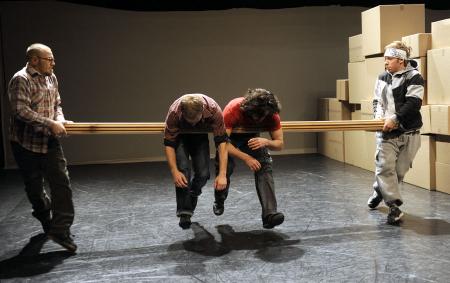 In court masques designed by Inigo Jones in the seventeenth century, Charles I, King of England, enjoyed a perspectival vision that could be seen properly only from the king’s seat.

Flattered by this artistic creation, the king thought he was the center of the universe and clung to his divine right to rule in the face of revolution, eventually losing his head on the scaffold. This bare-bones historical tale suggests something of what could be at stake in the decision taken by choreographer Daelik and collaborator Paul Gazzola in The Open Spaces Project to remove the seats from the theatre and shift the sightlines and performance spaces throughout the show. Remember, Open Spaces says, you can only see part of the story at any given time. Instead of patriarchal majesty, the Project offers viewers vantage points that are fluid, fractured, and folded into an evolving community of movers and watchers.


The piece begins in the foyer, with a video of local dancers talking about rehearsal space playing silently. The choice to listen with headphones is up to the individual. As the foyer fills up, four dancers (Clinton Draper, Shay Kuebler, Brett Owen, Christopher Wright--all men) join us and go with us into the performance space, where Daelik and performer Alex Ferguson are already holding up two long wooden vertical beams. In this first image of what men do, the message I got was one of structure and support. Men hold things up. They build things with wood. They define spaces. By changing where they are facing, the men redefine the space. But after the audience has settled into a gentle semicircle, a wall of cardboard boxes at one end of the space starts moving towards us like the garbage compacter in Star Wars, crushing us towards the dancers. Now we have less space. How does that feel? We are corralled. But then, surprise, the space on the other side of the wall is open for dancing, and by looking through gaps in the wall, or frankly walking around it, we get to see these male bodies in motion.

The five dancers give us something worth watching. Their dance style, honed through contact improvisation and other movement and theatre training, emphasizes the athleticism of lightness, the going-up of going-down, and vice versa. Each male body is different and dances differently, and the choreography plays these individualities against deeply satisfying moments of unison.

My favorite movement of the whole piece happens here, on the other side of the wall, when the wooden beams go horizontal, gain rotation and are passed, fast, among the men, so that they have to lean, duck, be in the right place. Now I’m seeing a construction site, the beauty and pleasure of building.

The theme of masculine space is developed also with projections of public bathrooms and of the desert (roamed by cowboys) and the open sky (sound and video design by Adam Tindale). This piece has global resonance, but the images are particular and evocative.

As the men dance, my body hears their momentum and wants to stretch and fall. This active engagement of the viewer’s body is something the piece courts, as we must move to see what is happening and dancers also model shifting from movers to watchers and back again. In a way, the audience is being educated (but, thankfully, not offended) in the art of improvisatory dance as we decide when to move in the space, where to go, and what is most compelling to watch. When a piece asks more of an audience like this, it has to be offering something compelling, and Open Spaces does, with rich movement, resonant images, gently unsettling text, and a substantial topic that is developed in a fresh way.

Back on the other side of the wall, the men open up the fire video loop--familiar to many of us from when it occupied a TV channel with its cheerful crackling--on cell phones or personal video players. It is weird and funny to see them sit around with little individual fires (campfire meets global business meeting), and it gets better when a fireside chat begins and the men collaboratively lay out what men should do. The prescriptions, scripted by the performers, go from the conventional “Every man should own at least one suit” (Brett) to the rhapsodic “Men should hold pencils. They should sharpen pencils with a pocket knife, write poems with a knife-sharpened pencil,” the vainglorious, “I’m handy with a crescent wrench. Easy with a credit card,” the intimate, “men should cook for each other…read to each other” (Alex), and the goofy. “A man should be able to fix a toaster,” Alex informs us. “A toaster should be fixable,” Shay chimes in. If what men should do is a box, these statements, offered as friendly advice, define its edges, then shift them, change their substance (from steel to cardboard?), and let us laugh at them, though we might still go on believing them.

Such statements, like physical structures, can be both empowering and confining. As can individual human bodies. Another arresting sequence illustrates this principle, as Shay digs with his hands in his highly muscled torso, using the explicit manipulation to initiate movement.

In the last section of the piece, two men put their heads in cardboard boxes (these ones have country music labels on them), and confess or give reasons. The procedure apparently opens up their hearts or allows them to speak, but at the same time, country music is a box, and one’s own thoughts can be a box. When Chris piles the remaining labeled boxes up really really super high, I think, okay, he’s going to topple them—because really, what else is there to do—but he DOESN’T, and instead he puts the whole stack on his shoulders, puts his head inside, and commences some major confessing, about feeling small, about having designed his life all wrong, about being lonely. When finally he does throw the boxes down, and Led Zeppelin’s raw strains take over from the effort at verbal intimacy, I’m not sure if it’s because his confession worked and brought release, or if it’s because he’s rejecting the whole idea.