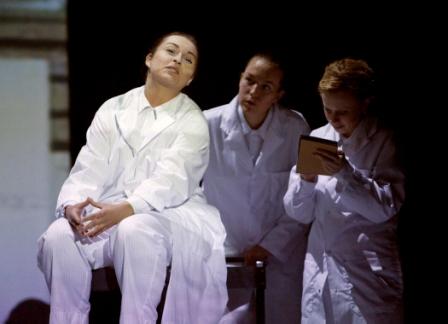 The inspiration for MK Woyzeck is Georg Büchner's 1837 play, simply called Woyzeck, which was left unfinished at his death. According to the program notes for the production currently on at the Frederic Wood Theatre out at UBC, the mounting of a version of Büchner's challenging political play has become a rite of passage in theatre circles.

MK Woyzeck is thus adaptor/director Tom Scholte's kick at the proverbial can. The “MK” in the title refers to the second major source for the adaptation: the MK-Ultra project, a 1960s CIA initiative to conduct medical experiments on incarcerated criminals.

MK Woyzeck layers together two narratives: Büchner's story about a Napoleonic soldier who is exploited by doctors and his military superiors, and who ultimately murders his lover; and the story of a Vietnam vet, Lenny Barret, who suffers post-traumatic stress, winds up in jail for theft, and who also becomes a medical/military test subject, before committing murder. Scholte weaves together the two stories, allowing one to inform the other and exploring the parallels between them.

In addition to the double narrative, MK Woyzeck employs a highly conceptual multi-media set. The stage consists of a white back wall; grey and white checked floor; and white risers. Onto this are projected ancient battlefields; night streets; misty woods; and the sterile cells of a penitentiary. In a nice added touch, all masking has been removed from the wings of the stage so that the exposed bars and pipes of the theatre become part of the institutional setting. Performers are dressed in white lab coats and when they impersonate characters from the story colourful costumes are projected onto their bodies. At other times, they default to the role of doctors in the aforementioned medical experiments. MK Woyzeck is presented to the audience as an experiment in reading history, in which the doctors try to decipher its recurring patterns. The performers frame their pursuit with a quote from Büchner: “what is it in man that lies, murders, steals?”

This is a fascinating exercise in story-telling and critical thinking and it very successfully draws out the weighty ethical questions at the heart of the two soldiers' grim experiences: what is our collective social responsibility for the actions of individual criminals? All too often playwrights drive home their points by putting morals directly in the mouths of their protagonists. MK Woyzeck manages to speak its larger themes by other methods. The double story of institutional failure leaves the message between the lines, but nonetheless it reads clearly: if individuals suffer abuse at the hands of their parents, leaders, doctors, and judges, who are we to be shocked when they commit violent or anti-social acts?

Kudos then to Scholte for a bold and ambitious retelling of the Woyzeck tale. He undertakes to make the life of a nineteenth century soldier relevant and in doing so shows us why Büchner's mysterious and fragmented play continues to speak to audiences long after his death. That said, Scholte's marriage of the Woyzeck and Barret's narratives is far from perfect. Büchner's play touches us today because the abuse of power is not new nor has it been solved. Yet it is clear from the fragments of Büchner presented that he also had in mind themes particular to his age, for example the role of Christianity in the subjugation of the working class, social hierarchies particular to nineteenth century Germany, or the significance of adultery to nineteenth century audiences. In Scholte's retelling, these elements seem anachronistic and beg to be enlightened with a dram or two of context. The character of Marie, Woyzeck's lover, is surprisingly vivid and articulate, a sign that her voice was important to the Büchner original. In Scholte's retelling, she seems out of place, because of the emphasis he places on the two unfortunate soldiers (one of whom, of course, is his own imposition on the original story). When Woyzeck suffers visions of demons or calls on God, one can see parallels to Lenny Barret's own post-traumatic visions, but there is something in the particular religiosity of Woyzeck that is left unexplored.

With regard to the imported twentieth century material, it is curious that we hardly hear from Lenny Barret himself. His story is sketched by friends and lovers, and his medical treatments are outlined by doctors. Barret himself speaks but a few lines and he is almost never in conversation with another character. And this points to what is perhaps the most telling absence: the voices of the central characters. In a sense, this is in keeping with the themes of the play: just as the real Woyzeck and Barret were tools to their superiors, so their theatrical versions are screens onto which the theories of others are projected. The production underscores the fact that these stories will never be told in the words of the men who experienced them, only in the words of others. It also begs another question: what is the role of story telling in relation to history? Can a work of fiction put words in the mouths of the dead, and to what end?

MK Woyzeck is not for the faint of heart: it is tech heavy, conceptual, and dense with historical material. With so many elements at work, Scholte's play occasionally feels unwieldy. Many possible avenues of inquiry into Büchner's material are left untouched. Likewise, both Lenny Barret's tale of mental disintegration and the CIA's unethical experiments could each stand on their own as unique stories told separately from the Büchner tale. One can't be all things to all people, however, and so it seems right that the playwright is selective is what he presents on stage. As the performers tell the audience, MK Woyzeck is a foray into the unknown: above all it is an experiment in story-telling and not the final word.

MK Woyzeck continues until October 10th at the Frederic Wood Theatre. For more information on the show go here.