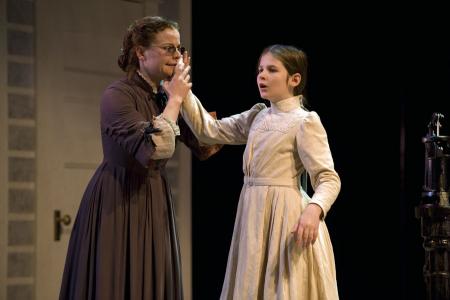 When I was nine, I was limited to three very enthusiastic topics of conversation: Helen Keller, Annie Sullivan, and whales. The latter was inspired by actual encounters (my Dad was a commercial fisherman), but my interest, um, make that obsession, with the deaf and blind Helen Keller and her teacher Annie Sullivan came from regular readings of their Scholastics biographies (both by Margaret Davidson).

Given my commitment to my childhood heroines, imagine my excitement and trepidation attending the Vancouver Playhouse season opening production of William Gibson’s The Miracle Worker, the story of Annie Sullivan coming to teach a young Helen Keller. What director Meg Roe achieves is a stunningly robust and creative working of a rather dusty and creaky script.

The play follows a short snapshot of the lives of Helen Keller (Margot Berner, alternating with Emma Grabinsky) and her teacher Annie Sullivan (Anne Cummer), but it is of course their most pivotal time together that is at the core. The play opens with doctor and family gathered around baby Helen’s crib, as she recovers from a fever. Alessandro Juliani’s soundscape gives us a brief and powerful impression of the last sounds Helen heard. Alone with her 15 month old daughter, Kate Keller (Jennifer Clement) discovers Helen’s fever has left her deaf and blind.

For the rest of the play Helen is a young girl running wild. and the desperate family hires Annie Sullivan to teach her. No one is sure what exactly can be taught to such a child; but Annie has designs on teaching her sign language, getting her to understand objects by immediately signing the word for them in her hand. She starts with the doll she brings Helen as a gift.

Allan Stichbury’s set feels like being inside a paper lantern, where light and darkness guide the story. The vastness of space around the characters and the careful choices of basic set pieces beautifully strip bare the weight of the realism of Victorian rooms in a wealthy Old South plantation. Instead we have immediacy and intimacy with characters and ideas. The set revolves (literally) around the ever present water pump, like a religious symbol in a house of worship, thereby not distracting us with thoughts of “I guess the famous water pump scene comes later”.

Lighting designer John Webber and costume designer Sheila White create a look of old photographs come alive, which suits not just the context of the late 19th century but also the 50 year old play itself, acknowledging it’s dated storytelling style of stylized exposition and heavy handed scene endings. The perfection of all these choices make such flaws in the script almost undetectable, which sets a very high bar for the big theatre companies in town when they proceed from here in remounting older plays where the value of the story outweigh the value of the script.

Annie’s battle to reach Helen is paralleled with Helen’s father, Captain Keller (Tom Butler), and his relationship with his son (Ryan Beil). The actors temper the obvious plot device with the ease of Southern charm. As Annie continuously stands up to “the Captain”, insisting on teaching Helen her way, Ryan Beil’s transformation from looking down on this low class interloper to feeling envy and respect for her courage, is gently heartbreaking.

Bridget O’Sullivan as the Captain’s sister Aunt Ev and Marci T. House and Hamza Adam as the household servants round off the strong cast. Aunt Ev is fond of wild child Helen, but unsure of her new teacher.  As Annie makes clear her own rules for transforming Helen, Aunt Ev reminds us of the status of this wealthy Southern family, steeped in Civil War history. This history is echoed loudly in the presence of the household’s ‘Negro’ servants. What could be an uncomfortable silence of little lines or purpose in these characters is erased by House and Adam bringing moments to life, including a sweetly meaningful parting. Roe has worked carefully to not let the dated dismissal of the significance of these characters drag down the essence of a story of human potential, and it is an appreciated effort.

But of course the core of this production is the extraordinary work of the actors playing Annie Sullivan and Helen Keller (which on the night I saw it, was Margot Berner).  Berner’s Helen is astoundingly truthful. Cummer beautifully portrays the defiant young teacher struggling with a painful childhood of horrifying poverty and loss, who tries to prove to herself and everyone else that she can reach an unreachable child.

The famous Breakfast Table scene, where Annie teaches Helen discipline that will enable her to learn language, is hilarious and fraught with tension (thanks in no small part to fight director David Bloom). It’s a wonderful moment in theatre.

When Annie and Helen move to a small lake house so Annie can teach without distraction, it is compelling to watch the emotional and physical struggles to reach one another. When at last Helen makes the inevitable connection to flowing water and the word, it is a satisfying crescendo.

I think what made the moment resonate so strongly is that the actors achieve a level of truth which conveys a kind of humanism that is as powerful as any battle heroics. The odds against are stacked so high that in this age of jaded and insincere recounting of miniscule “aha moments”, it’s a striking reminder of what it is to accomplish the truly remarkable.

The Miracle Worker continues at the Vancouver Playhouse until October 31st. For more information go here.