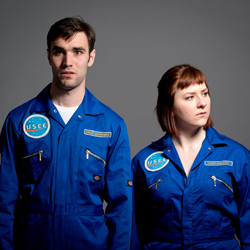 My first question going into this production was, "is this about Mars?" The answer to this question did not disappoint. It is about Mars.

It follows a father and daughter on a long road trip to Olympus Mons on a recently colonized Mars. The father (played by Mark Nocent) tells the daughter (played by Valerie Cotic) the story of the first two astronauts to come to the red planet, Strider and Magic (also played by Nocent and Cotic). The story itself is really well put together and has a well polished flow; it also covers some very interesting material and speculation. Kudos to the director, Jayson McDonald. To comment further on the plot of the story would be to deprive it of a certain portion of its impact, which I wish above all else to be conserved for your wonderment and delight.

You, yes you, in the red shirt, or the blue jeans, or the delicately embroidered tinfoil hat, YOU should watch Mars. I cannot stress this point enough.

The dramatic range of both actors is readily apparent throughout the production, both thoughtful and humorous, and at times vigorously discombobulated. Mars portrays in vivid detail what it is like to travel across the solar system in what Strider refers to as "a soup can". The dialogue is snappy and funny and well rehearsed. This show has clearly been well polished and is brilliantly executed. I especially enjoyed the daughter's commentary on her father's story, constantly hounding him about how much of "the procreation, the primal urges, the... gettin' it on..." went on between the astronauts. At points during the production it also seems as though she has taken on the role of storyteller and the astronauts behave as she believes they would have.

Strider's reaction to being awoken from hypersleep is also, just gold... just brilliant comedic 428 carat gold. I love it. "What's your vector?!", "the photon hole has jargled our ion differential." Oh yes! that brings me to another thing I loved about the play. The space jargon was real! in that first moment of Strider talking about ion differentials I thought, "oh brother, not the made-up space jargon again!". But no, Mars wonderfully lampoons this trope in a fiery display of playmanship. And when they do talk about space things they use the real names and contexts, for instance when talking about potential new colonies the father mentions living on Ganymede, or Europa or Titan (moons of Jupiter) or even Ceres (yes they flip-floopin do mention CERES! the dwarf planet just next to Mars in the asteroid belt, which we visited earlier this year and which you also didn't hear about!).

I could go on and on and on and ON about how much I loved this whole production, but rather than risk my academic credentials as an applied animal biologist in training I will simply say this:

At the end of the show they sold buttons. And I bought one. It is on my backpack now and shall remain there evermore.