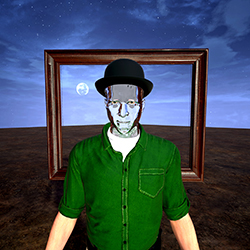 This three part fusion of digital and live-action visual manipulation is stellar in its conception, but varied in execution.

We’ve all seen something of the latest in motion capture technology, most likely on the screens of the latest Hollywood blockbuster movies. In a short introduction producer, director, and performer Athomas Goldberg informs audiences that the result of motion capture that we see on the Hollywood screen arises from the immense effort of teams of digital artists and technicians. He says this process takes a long time in film post-production because a single minute of motion capture performance creates many more hours of corresponding data.

Manipulation brings the technology of motion capture to live physical theatre and tells “smaller, more intimate stories” than blockbuster action epics. A story unfolds in each of three distinct works by three distinct performance troupes, all of which explore the possibilities of motion capture technology in real time. Collectively, the show studies the relationship between live action on stage and projected virtual action on screen.

Despite using the same high-tech equipment, these three performances are not of the same quality. Know that good old sandwich feedback technique – ordering your comments 1) positive, 2) negative/constructive, 3) positive? That structure lends itself perfectly to the order of performances in this show.

1) In the opening performance, Moth Orbit, Object Theatre stages a meditative and aesthetically wondrous adaptation of an Aesop fable. Three actors make graceful and wide-spread use of stage space while manipulating objects. Motion capture technology is used to translate the movement of the stage objects into an absorbing display of digital puppetry on screen.

2) Cloud Opera performed a two-part adaptation of a children’s book, creating an incessantly annoying sound opera using motion capture. Two stage characters wave sticks over words on the screen, casing the word to be pronounced out loud. To say that this intriguing feature was overemphasized would be an understatement. The sticks waved around manically fast such that the resulting audio execution was like listening to a broken squeaky toy. It didn’t help that the performance was organized in two symmetrical parts; it was like attending the broken squeaky toy’s back to back concerts. This show ruined an otherwise creative technological idea.

3) Cause & Effect Circus’s piece immediately won me over with its diverse use of motion capture to celebrate child-like curiosity, imagination, and expression. Three boys played on stage while the screen portrayed the shared space of their collective, collaborative imagination. The sets, both stage and digital, were phenomenally integrated, and, towards the end the performance, touchingly incorporated an homage to the greater geographical setting of Vancouver. The circus performance alone would have been enough of a show in and of itself, but with motion capture technology, this piece achieved something truly magical.