MACHiNENOiSY: Swimming the other way in Vancouver dance 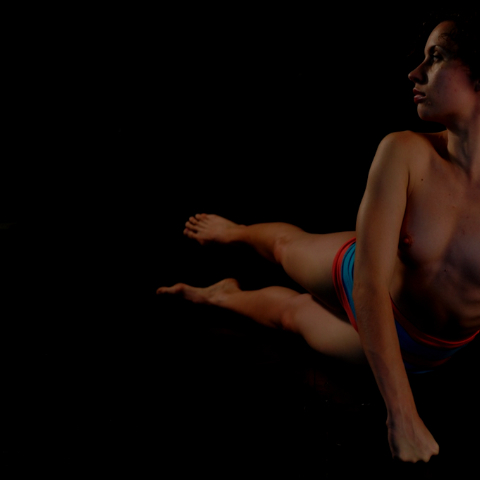 Laura Hicks in He was swimming the other way, photo: Chris Randle

For me one of the great pleasures of spending time in Vancouver is the city’s contemporary dance scene. It’s a hidden gem in the Canadian cultural landscape.

But lately I’m starting to wonder. Years after modern ballet has peaked and waned in Europe, the genre seems to be sweeping over Vancouver, putting the city’s dance community in a kind of modernist time warp. By the looks of it, local coverage of the scene (minimal as it is) has tended to celebrate what I consider to be a bit of a monstrosity, a dance-regression creature from the crypt (hey it’s almost Halloween), a throwback to a less creative, more uptight aesthetic. The neo-ballet phenomenon, which is really paleo-ballet when you put it in a global context, is spreading through the scene here like a virus.

Unfortunately, there’s a double virus infecting the scene, and the second strain may be more lethal than the first: the specter of Martha Graham. This bug seems to have originated at Simon Fraser University. A number of choreographers hailing from the dance institution on the hill (the so-called “School for the Contemporary Arts”) seem intent on resuscitating the legacy of this American icon of modernist dance. And, to be frank, they’ve cherry-picked the worst of Graham’s tendencies, exhibiting nostalgia for the 1970s inheritors of the Graham tradition. Is it a case of everything old being new again? Is what comes post post-modernism just looking backwards?

All of this is a preamble to say thank god for companies like MACHiNENOiSY and for choreographer Delia Brett’s He was swimming the other way. One of the stand outs at this year’s DIV festival, swimming is almost unclassifiable, but clearly draws from contemporary movements such as contact improv and dance-theatre (or tanztheater in the original German).

The basis for much of Brett’s dance vocabulary comes from the partnering techniques of contact improv, particularly as it is practiced at EDAM in Vancouver. I would describe it as a bringing together of bodies in a way that is lyrical and, at the same time, respectful of skeletal structure. This lyricism is evident throughout swimming. The dancers flow in and out of each other like waves crawling up sea cliffs then gently returning to the ocean—perhaps an apt metaphor given that the piece is about mermaids. Or rather it’s about mermaids and sailors, and how they misunderstand each other. The narrative moves with the same lyricism as the dance—it flows around the theme, moving forward without anxiety, meandering, then finding its own way to the next part of the story.

On the one hand the dancers loosely represent characters and, as I just described, there is a story of sorts threaded through the piece. You might argue there’s a lot in common with early Graham here—the mythic trope of the mermaid for example (Graham tended to work with grand mythic structures). But Brett and company play with this “archetype” lightly. There’s no fixed symbol to hang on to, nothing ponderous about it. The mermaid identity in this piece is like a really good costume you can get into, and then take off at will. And that goes for the identity of the dancers as well. They take themselves seriously, but playfully so.

Brett walks this line with her choreography. She approaches both the expressive dancer-body and the formalism of movement-for-movement’s-sake with a curiosity that keeps the one from overwhelming the other. I think this is what puts her in the dance-theatre idiom (if I can call it an idiom). A few decades ago dance-theatre broke with formalism in modern dance, famously in the work of the great Pina Bausch. In place of the dancer as choreographic puppet, Bausch gave us the dancer as an expressive subject, a subject with her own desires. Where choreographers like Bausch are confrontational, using theatrical questioning to uncover the presence of each dancer, Delia Brett has a more seductive approach. Here a sea shanty, there a stand-up routine — a number of such episodes are discovered on a wild boat ride through dark waters and bright carnivals where dancers, like trained seals, perform gravity defying tricks with rubber balls that have the faces of men. Tanya Podlozniuk performs a hilarious monologue in which a “mermaid” tries to negotiate her control issues with a passive-aggressive sailor/boyfriend (an appropriately mute rubber ball). This is just one of part of a voyage that is full of surprises and delights.

Each dancer offers a fully sculpted performance infused with a personality that’s all her own, while at the same time contributing to the overall unity of the piece. It’s clear that Laura Hicks, Jennifer Mcleish-Lewis, Caroline Liffmann, and Podlozniuk have carved their personal desires out of the work. Composer Chris Kelly’s music and design are so layered, subtle and complex, that it would take another review to do it justice. I’ll just say that the rich contemplative atmosphere of this work owes a great deal to his sumptuous soundscape.

One sour note: it’s puzzling that Brett’s work is sandwiched between what are obviously two pieces by “emerging artists.” I don’t want to come down on the curators, but how did this happen? It’s a strange oversight in what is otherwise a logically organized festival.

And now that I think of it, I probably haven’t done any favors to MACHiNENOiSY by pitting them against the modernists. I don’t mean to make my feud theirs. Go ahead and vent at me, not them. I remain a passionate supporter of contemporary dance and simply want to see more of it in Vancouver.

Mikis Vrettakos is a dance scholar who divides his time between Thessaloniki, Berlin and Vancouver.