The Laramie Project: too much 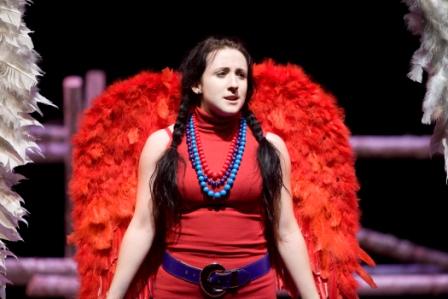 The Laramie Project creatd by Moises Kaufman and the Tectonic Theater Project, presented by Theatre at UBC at the Fredric Wood Theatre, is in need of a good editor.

At two and a half hours, the poignant vignettes get lost in the repetition of clichés – “Live and Let Live” or monologues about how they may be a small town, but they really like “fags”, especially when they keep their distance. Fortunately, the shining light of the play is not lost amongst the verbiage.  On October 28th, 2009, US President Obama signed the Matthew Sheppard and James Byrd Jr. Hate Crimes Prevention Act. Everything else is just small-town chatter.

The play was created in response to the 1998 murder of University of Wyoming student Mathew Shepard in Laramie, Wyoming. The murder was considered a hate crime motivated by the fact that Shepard was gay. The play itself draws on hundreds of interviews conducted by Tectonic Theater Project with inhabitants of the town, company members' own journal entries and published news reports. The Laramie Project is therefore the story of how a small town deals with the murder of a young, gay student. Fifteen actors play sixty-five characters, but most of the student actors seem too inexperienced to display the flexibility needed for a multi-role play. Tich Wilson and Ben Whipple are two highlights. Wilson brings a beautiful grounded energy to her role as Romaine Patterson and Wipple is the only actor who can actually perform four believable and unique roles. For the most part, in this Nicola Cavendish directed production, the actors seem to be focused on over-projecting and unbelievable body movements which have you wondering when they are going to break out into “Jazz Hands”.

The play could have, and should have, ended after the second act. Entire characters could have been dropped. When Zubaida Ula, played by Sarah Goodwill, shows up on the scene, instead of offering any insight you quickly realize she is part of the play because she’s a Muslim Feminist.  Does she offer anything to the script itself?  Maybe ten more minutes of wishing you were at home.

The play’s content needs to be talked about and confronted until it is no longer an issue, but unfortunately Moises Kaufmann and the members of the Tectonic Theater Project may be too passionate about the topic to realize that a single sentence is sometimes more powerful than a paragraph.