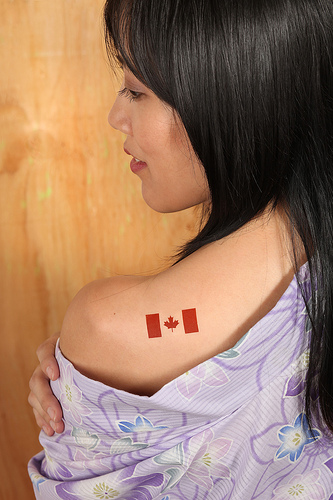 Japanglish, a tight and intelligent one-woman show, centres on the defining moments of a Japanese-Canadian family straddling two almost incompatible cultures. As their daughter embodies Canadian sensibilities, the parents struggle to fit into a new place and new language.

Much drama and humour is contained within this short show, and as much of it stems from the unavoidable tension that exists between parents and children as from the culture clash. The family in Japanglish is distinct in their traditions and viewpoints, but the show is grounded in the conflict found in all families, spawned by generation gaps and diverse personalities.

The cultural setting heightens both the comedy and complexity, creating misunderstandings and giving us a glimpse at how difficult it can be to bridge the gap between two worlds, even if they reside in the same house.  Fighting through a seemingly impossible struggle to understand each other, characters irreparably wound one another but they also surprise each other and succeed in connecting despite obstacles, if briefly.

Switching from soft mother to stoic father to effervescent daughter, performer Yumi Ogawa distinguishes each character with exaggerated physicality to avoid confusion. Her apt impersonations carry some humour into some of the more dramatic pieces in the show, which maintains alightness throughout the emotional show. Asides to the audience allow her to escape the restrictions of dialogue and to flesh out all her characters.

Though Yumi Ogawa has been performing this astounding show for over a year, she delivers tactile emotion as if it’s her opening night. With a nearly bare stage, she creates the sensation of memory through sheer energy and presence; Japanglish is elevated by her irrepressible talent and passion.

Japanglish is part of this year's Uno Fest in Victoria. For more information travel here.