House of KOSA: Outré Specimens of the Bizarre 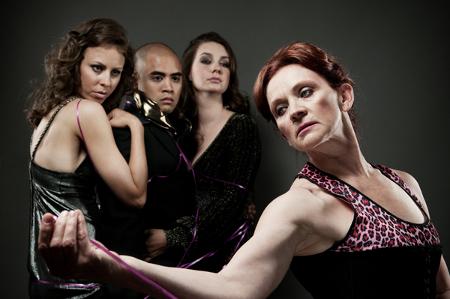 The chorus look on mother in House of KOSA. Photo credit: Cory Dawson

House of KOSA by Miranda Huba, presented by the TigerMilk Collective, depicts the warped personalities of the family that governs a fictional fashion house, with particular focus on the relationship between the head of the household and the daughter who is his only scion.

In this decadent and ruthless universe father and daughter bond over breakfasts of champagne and French pastries by sharing stories of sexual debauchery: father hangs on daughter's every word, and delights in the notoriety her scandals bring to his house. Their sordid morning tête-a-têtes are presided over, vaguely, by the mother of the house, a faded beauty dressed in tulle and tiger stripes who barks like an angry poodle when not speaking in riddles.

Vignettes between the central players are moved along by a chorus of four.  Cast as the servile pawns of the house, they describe each new setting at length, weaving together images of dust, decay, and sexual perversity.  They sonorously intone the scene numbers, as if to remind the audience that the clock is ticking and no one gets out of here alive.

House of KOSA has moments of brilliance: the plot is sweeping and a wealth of wit lies buried in the script. The story is built on grand allusion: costumes reference film and celebrity icons from Paris Hilton to Sophia Coppola's Marie Antoinette. There are snippets of myth and fairy tale buried in the plot – Bluebeard's Egg, Cassandra, the Delphic Oracle, the biblical story of Salome and John the Baptist. In a play about a corrupt dynasty, these are satisfying reminders of famous tales of tragedy and hubris.

Unfortunately vaulting ambition o'er leaps itself, and House of KOSA ultimately sinks under its own weight.  Running at an hour and forty five minutes with no intermission, the play chugs along at a funereal pace.  The chorus is all too authentic – they speak in unison at all times, even when the pace of the play might be better served by alternating voices that would allow different personalities to shine through.  The three main characters deliver cryptic lines with icy detachment and little on stage chemistry.  One senses that they do the best that they can with a difficult script, which asks them to speak their subtext while never permitting them to get directly to the point. The effect is a like listening to inexperienced Shakespearean actors deliver their lines: statements that ought to be pithy often miss their mark and come out sounding jumbled and confused.

At bottom, House of KOSA is a story of redemption: the daughter of this corrupt house tries desperately to find her own voice while living in a den of iniquity.  She rebels against the cult of sex and beauty, turning to mysticism, asceticism, and born-again-virginity, looking to overcome her inner emptiness.  She tries vainly to find tangible proof that her father loves her and not just her body parts.

Unfortunately, the central characters of the play are shallow and static, and they grow very little over the course of its unfolding.  Nor is there any comic relief to lighten the play's somber tone.  The chorus members might have offered this lightness, but they are restricted by their narrators' roles, and their potential for comedy is largely untapped.

By far the highlight of House of KOSA lies in its unique costuming and set.  Characters wear elaborate headpieces or have sculpted authentic coifs, their clothes are a bright a pastiche of the strange and modern.  Chorus members strut along a floor-lit catwalk, the daughter drapes herself across its surface as if offering herself for dinner, and the mother lives like a spider in an attic hung with the ghosts of fashion past.

House of KOSA is unquestionably successful when it comes to immersing the audience in an imagined world peopled with outré specimens of the bizarre.  Its shortcoming lies in pacing and character development: relationships are so devoid of humanity that there's little satisfaction for the audience in watching as they are played out.

Listen to the PLANK podcast of Rachel Scott's interview with playwright Miranda Huba.