Gunpowder: anything but a bomb! 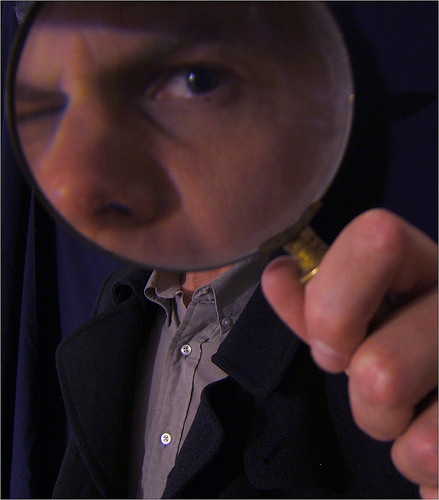 Writer/actor Jayson McDonald gets shot through the heart, flips the bird at who’s to blame, then, as detective Thom Phox, sets about cracking the case. So goes Gunpowder the very first show of this year’s Uno Fest, and it goes pretty well.

Save for a chair, the stage is blank – a classic set for a one-person show. Mime skills are important on a stage like this and I have to say I’m still a bit conflicted over McDonald’s. The most common parts of bringing a mimed set to life – opening doors, handling (and throwing) small objects and so on – didn’t seem to weigh enough in McDonald’s hands. Antiques or vases of considerable value are knocked over and shattered a few times, but this is mostly indicated by cries of “bonk!” and “crash!” At first glance, this seems somewhat in character, since Phox is such a bumbler. Once it appears across characters, however, these passed-over details, small as they are, disappoint just a bit.

When action takes center stage, though, McDonald does magnificently. Fish flop, things explode and McDonald (the actor) beats McDonald (the character) heroically up and suddenly things feel as “flesh and blood, baby!” as McDonald (as Phox) gleefully reminds himself (as himself – or, one of his-selves). When McDonald’s mime teams up with the tech crew, magic happens. He carries out one early scene lighting mimed candles, while lights inch their way up. To close the scene, McDonald blows the lights out, spotlight by spotlight. Something even better comes in at the end, too, but I can’t spoil it. Suffice to say that moments like this sucked the audience in, like anything can when it’s well-mimed, so it was too bad the mundane parts didn’t shine as bright.

The show’s humour opens all sorts of windows on the fourth wall, which might be out of some audience members’ tastes. What’s refreshing about Gunpowder’s self-awareness is that it doesn’t milk it in too fatalistic or too ironic a way. There’s no “oh dear, I guess my life is all predestined!” or “hey, look at this noir trope!” from Thom Phox. He keeps an innocent attitude about his fictional nature. Phox stays aloof to how odd it is for his own actor to also be three separate people relevant to the case – including the corpse, of course – while reveling in his mysterious ability to go from his office to his car in roughly a second. It’s impossible not to sympathize with the guy – or the fun he’s having.

The biggest comedic treat, though, has to be McDonald’s way with words, as both actor and writer. Giving Phox the diction of a valley girl is delightful in and of itself, but it’s a whole other thing to deliver it without sounding strange. McDonald pulls it off. The characters flirt with stereotype but in the clownish way that makes for good comedy, making jabs at stock personalities, rather than repeating familiar lines. There’s a flamingly gay magician who felt a bit “done before” in a couple of ways, but he offers the best physical gags and even got a charming little aside about fruit (literally fruit, specifically oranges) that kept me from disliking him.

Gunpowder is an all-around good show. Its flaws are minor and never clot into something big enough to stop up the comedy. I’d like to see it again just to make sure I’m being fair to it, but what does that mean, other than I’d like to see it again? Go check my notes for yourself! Saturday the 22nd, 7pm, Metro Studio on Quadra. You’ll love it.

Gunpowder is part of the Uno Fest and is at Metro Studio, 1411 Quadra, for more information follow the trail here.