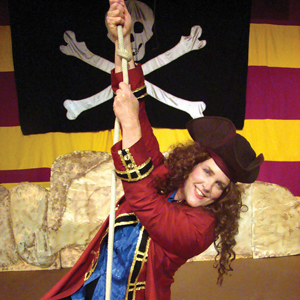 Victoria: Opening night for Full Blast drew in only a modest crowd (though something lured in Atomic Vaudeville’s Morgan Cranny), but the premise seemed promising. It seemed like something madcap and fun! A real spectacle!

At the helm of this mostly one-woman show stands its writer, star and mastermind Mila Johansen. While Johansen occasionally demonstrates a knack for writing middle-aged witticisms, she fails to deliver them. For the first stretch of the show, one might be tempted to credit Johansen with intentionally poor acting, only to wow the crowd once her never-was actress, Cathy (quickly renamed Victoria), commandeers the theatre. This moment never comes. Johansen’s tone runs the gamut from tired to shy to bored but only rarely makes good on the promise of playing a “premenopausal/postmenopausal diva.”

She simply lacks the energy and charisma to keep a monologue interesting.

It isn’t as though Johansen doesn’t try, though. The set blooms with colors, costumes and toys, free cookies fly into the audience, pizza arrives and even a few songs are offered. Few of these novelties seem completely thought out, though. Because she performs so quietly, Johansen’s free bags of cookies stifle her monologue as they crinkle in the audience. When the blues start playing, Johansen musters neither the sauciness to make it legit nor the awkwardness to make it funny. Another song consists of miscellaneous French words and Johansen shuffling to and fro in a voluminous pink dress. Once pizza arrives Cathy and her nemesis the Janitor (Chris Gabel) inexplicably join forces to help the delivery girl (Camille Cadeaux) win her boyfriend back.

None of this seems connected because it mostly isn’t. Aforementioned wit aside, the script wastes all sorts of time. Historical digressions about Marie Antoinette and the inventor of the flush toilet fill the silence of a long costume change. One-sided phone conversations with Cathy’s mother drag and the mom’s anguish over Cathy’s name change certainly can’t be heard in Cathy’s halfhearted consolations. Rodney the janitor, appearing infrequently to remind us he has things to do (usually with the same flat line each time) would be unnecessary to the script if Johansen didn’t suddenly decide to try giving him a little depth in the last ten minutes. As for pizza girl and her boyfriend woes, why does anyone even care? Shouldn’t we be resolving Cathy’s story at about this time, rather than introducing new characters? The much-touted surprise ending gets around to that, but it’s hard to surprise an audience that isn’t expecting a particular ending in the first place. “Abrupt” might be a better word.

The production just comes off as a cluttered toybox of sorts. A few neat things here and there, but not enough to sustain the audience’s interest. To compensate, the program can’t mention Mila Johansen’s international acclaim and many awards and accomplishments fast or long enough. Well, bravo for her. Just don’t expect Full Blast to add to them.