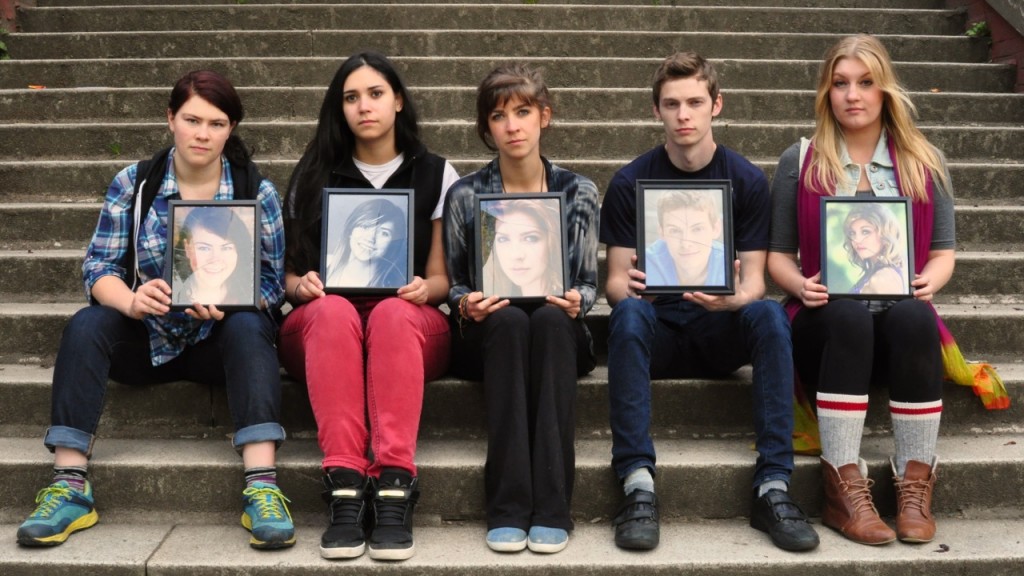 The play Fractured by Seacoast Studios looks at the aftermath of a school shooting. Nine adolescents who have survived a school shooting sit together and discuss what happened, how they were affected, why the shooter did it, facts about school shootings, and more.

I am curious as to whether this play is completely scripted, or allows some improvisation. The conversation among the nine actors flowed naturally. They inhabited their characters and conversed as them. When I have seen this done on film, improvisation is usually part of the magic.

I find it difficult to listen to scenes of murder, desperation, and fear. The accounts that the characters give of how the shooter moves through the school, how the shooter singled out some students, the recollection of a blood-filled sneaker, and so on, are not easy to take. The students describe how violent police evidence photos are readily available, how perverse websites target school shooting survivors for computer hacking, how school-shooting-based paintball is a fun activity for many, and other difficult to accept facts of life.

We are told the shooter Colton was not homophobic nor racist. Was he bullied? That depends who you ask, but surely other students were bullied much more. And Colton did not shoot these potential bullies, with a possible exception, but picked on girls who had never hurt him, and even shot a student that the character calls "retarded".

The play somehow picks up the theme of residential schools. One of the murdered teachers is Native, an excellent teacher who was not overly familiar with his students yet utterly respectful. His student describes how Mr. Jolliffe told them about how his village fell silent when the children were taken away, and how completely hopeless and inert the villagers became in response to losing the heart of their village. The character draws a comparison between that Native experience and the aftermath of the school shooting. This was an interesting digression, and it led me to think that a play about that aspect of the residential school experience would be extremely interesting and powerful.

At least one offstage character, the muscular tough father of a murdered girl, is exceedingly well-drawn. At the girl's funeral, he speaks a message of love and compassion for the parents of his daughter's murderer.

One student has lost her athletic hopes from the shooting, as it now hurts her to even walk. Another girl has bullets lodged inside her that cannot be removed. Another girl is in a wheelchair, unable to communicate verbally, but somehow conveying through expressions what she means, and she remains best friends with her sister, who has come to understand her sister's expressions. The show makes a serious effort to incorporate disability into this play, and does it quite well.

Would nine disparate students, some of whom are not particularly fond of each other, really sit around and discuss school shootings, possible root causes, gun control, and so forth? Although the play is entirely naturalistic, that part of the story does not necessarily seem real.

Fractured is a solid show. I do not see it as a groundbreaking production, but it creatively integrates multiple points of view to create a single narrative.