Everything Is Fine: A Slow Creeping Dread 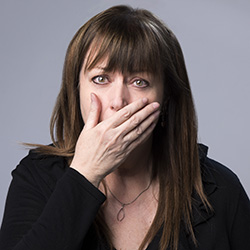 At the very beginning when Jennifer Martin started speaking about her childhood, I couldn’t follow the connection of the scenes. She seemed to be flitting about with different people and topics that were seemingly unconnected, but as all of the pieces of the story began to align, her childish way of speaking started giving off undertones of dread. Long before anything poignant has been said or done, you know it’s coming. As the story unfurls like a black rose, you’re brought to a very dark place full of possibilities of happiness but never shedding the permeating feeling of loneliness.

This is a story about how one moment can change your entire life and close you off from being able to connect with people; the damaging effect of always saying “I’m alright, everything is OK” even when nothing is alright or OK.

Martin did a fantastic job of writing this piece, lessened only by the fragmented beginning. Her words and proficiency as a storyteller allowed my mind to create almost it’s own video of the story. Her imagery was flawless and was especially driven home in her ability to not talk about the details of a pivotal rape scene and yet still have you right there witnessing it.

I kept trying to figure out whether this was a true story of hers or not. There were definitely echoes of realism to her speech but there were also these strange pauses where maybe she was trying to remember lines? It felt like she was removed from the story, like maybe it was real but she wasn’t allowing herself to fully feel it, or maybe she just wasn’t fully dropped into character. Either way, I found myself imagining more than watching. Perhaps that was the point.

I particularly like dark dramas that get you to think, and this was just that. If you’re the type of person that wants something light or if rape is a trauma trigger for you, this definitely is something you’ll want to miss.

Everything is Fine was perfect for the tight, cozy Arts Umbrella theatre. It really made you feel like she was talking just to you, or that you were looking in at someone’s innermost thoughts as they silently scream for help.