A Dog at a Feast - Dark and Delightful 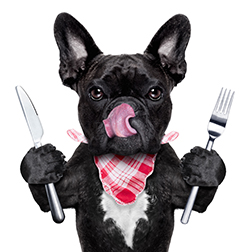 A Dog at a Feast written by Michelle Deines touches on the experience of women in theatre. An all female cast where men only live on the other end of the phone, some themes such as sex and success are hit head on, where others such as racism are tossed around only briefly with no depth offered. The play is done well but could go even further if developed into a full-length piece.

Maya is described as a starlet on a streak of luck, but is she sleeping her way to the top or does she have real talent? It depends on who you ask and on the story she needs to tell herself. Diane, bitter and angry at the world, is ready to take down anyone in order to lift her spirits even for a moment, an addiction as strong as her need for pills. Janet has maintained her sanity with her sense of humour, although she has lost everything else. Together the three of them try to come to terms with themselves while grappling with each other.

An amazing cast brings each character to life with both humour and compassion. Lisa Goebel with her high cheekbones and well defined beauty brings substance to Maya allowing us to see past the gossip columns. Barbara Tomasic with her ability to bring Diane’s tantrums to life far better than any Diane can accuse others of throwing. And Alison Kelly as Janet with her brilliant sense of humour delivered on point each time. Together they make a dark and delightful trio.

Michelle Deines is obviously a local insider with references to the local theatre scene delighting regular theatre goers and other kindred spirits. However, this never takes away from the audience experience and the themes are universal enough for all to enjoy.

Bleeding Heart Theatre is known for new play development and producing plays that address socially relevant issues. A Dog at a Feast fits the bill and is a fun ride as well.

NOTE: Kudos to everyone involved for dealing with a fire alarm and making the wait so worth my while.