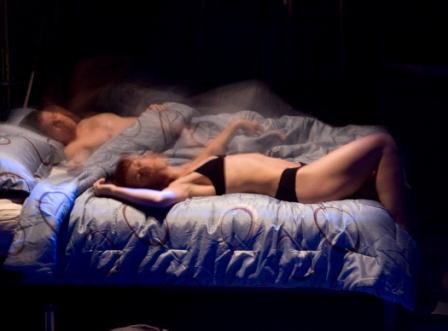 Stephanie Belding and Kevin K James are wrestling with each other and their demons; photo by Tim Matheson

I was very fortunate to attend the opening night of Touchtone Theatre’s world premiere Demon Voice.

Provocative issues concerning beliefs in sexuality are uniquely explored and the playwrights’ choice to delve deep into personal and modern issues is definitely thought-provoking.

Written by Shawn Macdonald (who won a Jessie for his previous work Prodigal Son), Demon Voice is a tightly woven piece interconnecting the lives of six characters - all very different people, all confronting their desires and their fears. The stories are intertwined imaginatively: Rachel and Mike are lovers, both holding complex backgrounds that chew away at their lives: Darryl and Pete have a close male relationship where they are torn apart at the same time drawn fiercely to one another: Anna and Mike have fallen into a mutually agreeable lifestyle that eats away at both of them: and Anna and Pete share similar but opposite lifestyles which brings them together magnetically.

On a set skilfully and creatively designed on five different levels (designed by David Roberts), the scenes move in and out of the intimate lives of each of the characters. As the connections are revealed, we sympathize with the struggles they face and the journeys they embark upon.

With passion and high energy, the powerful cast thrives in this engaging production. One monologue in particular, recounted by William McDonald (Pete) approaches issues of male love and tenderness rarely spoken of. A soliloquy about male energies - love rising to counteract the violent - is extremely poignant and will have many men revaluating their own belief systems. Gwynyth Walsh (Anna) masterfully plays the manipulative judge whose life seems rosy and powerful at first glance, but is uncovered riddled with anger and self-loathing. Other characters face their “Demon” in different ways. Kevin K. James (Mike) and Stephanie Belding (Rachel) are happy go lucky one time lovers whose deep undercurrents connect them stronger than either of them ever expected.

I did feel that Rachel, the all-togetherness and spiritually-enlightened personality, seems too resolved and content at the beginning of the script for what is revealed later. I liked the self-confidence of Rachel and was ultimately surprised by her history. Katharine Venour (Sara) has the most terrifying role and given the way it was lit and executed, if she was meant to be symbolic of our conception of a “demon voice”, it certainly worked. She pulled off the tormented soul successfully, although I found myself lost by what she was saying. Her intensity was so separate from the rest of the story, her final ability to be relieved (directly related to Rachel’s other tormented self), was the only time I really understood her prolonged pain.

Are they all evil or have they been possessed by a demon? I think not. I see them all desperately trying to survive the best they are able, going through their own individual and unique processes. It is part of who they are, not an exterior force, like a demon, which takes over their lives and forces them to do things they regret. These characters struggle to open their hearts, struggle with themselves and when they are successful, they are brought to happier places.

In his playwright’s notes, Macdonald speaks about two approaches he believes we have in life: create an inner life of beauty and peace and not worry about the outer or focus on the outer that needs to change and fight for it to be better.  I say he has brought together a combination; creating the inner feelings that are wanted which are then expressed and played out in one’s outer world. Pete wants love so he works on feeling and spreading the love; Rachel wants love, so she works on feeling and spreading her love.  The inner and outer are connected, one is the reflection of the other, as is all of life.

A few days later and I am still left thinking about the characters and their lives, the discoveries they made about themselves and about their choices. The intensity of Demon Voice brings alluring information to stew over, and provokes one to think about oneself and ones own “fears”, and then ask the question; what is holding me back from living my life lovingly and passionately?