Debbie Does Dallas & Hedwig and the Angry Inch: off beat double bill slightly off but fun 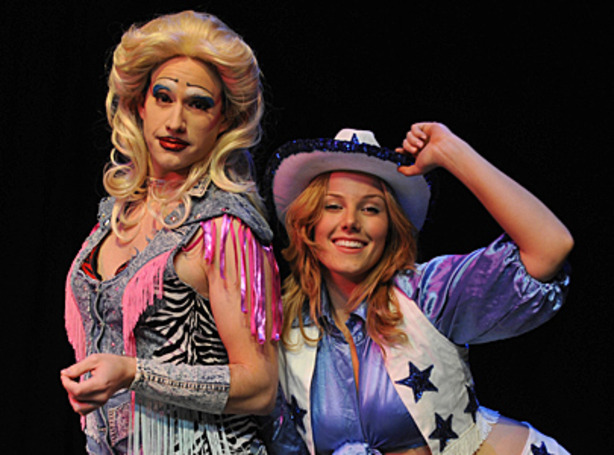 Seth Drabinsky, left, features in Hedwig and the Angry Inch and Jamie Robinson is Debbie in Debbie Does Dallas the Musical

With Halloween just behind us, one can compliment Ghostlight Projects for their savvy timing. With sexy costumes and hedonism still lingering in the memories of many of Toronto’s young adults (and die-hard middle agers) the company’s double bill of cult glam classics should help extend the spirit of the holiday.

Under the direction of Vancouver comedienne, Penelope Corrin (best known for her stint on Royal Canadian Air Farce), both shows happily wallow in their off-beat and low budget origins with sparse set design and uncomplicated staging - a mode that particularly compliments Hedwig.

Although evening opener Debbie Does Dallas: The Musical should be a vivacious romp (and much credit goes to the Ghostlight team for getting it half way there) it suffers from an uninspired script by Erica Schmidt that is intellectually suited for a middle-school aged audience, even if the content is anything but middle-school age appropriate.

When high school cheerleading squad captain, Debbie Benton (Jamie Robinson), is offered an opportunity to join the famed Dallas Cowgirls, she jumps at the chance. Just one problem: Her parents won’t pay for the trip and she has no marketable employment skills to speak of. You can probably guess how she eventually pulls the money together - and if you can’t, then you should skip this and go see The Sound of Music. Where the script truly fails is in the low-density of solid jokes. Lackluster stories can be forgiven if used as a framework for a steady stream of humour but give the audience a lackluster story and force them to sit through entire scenes without any comedic reward and watch the patience quickly dissipate. Even conceptual attempts on the part of Schmidt, such as a contrived and purposeless 4th wall break close to the end of the show, fail to redeem.

Having said that, the musical numbers are catchy and earnest and give the cast some room to show off their talent. Robinson does the best she can with her flat role (no ironic pun intended), and possesses a natural sparkle in both voice and presence. Allie Price as Tammy, an awkward overachiever, is handed some of the funniest lines in the play and does them justice with admirable comedic naturalism. Randie Parliament demonstrates his talent by stealing scenes in smaller parts as a gay cheerleader, a candle shop owner, and an aristocratic tennis player. Andrew Flemming as Rick, Debbie’s boyfriend, delivers a less than vibrant performance, but doesn’t harm anything that wasn’t already dead on arrival.

Thankfully, when its turn comes, Hedwig and the Angry Inch elevates the evening with a raw and in-your-face (and occasionally in-your-lap) experience. Although most are familiar with Hedwig as a successful indie film, Corrin brings the work back to its off-Broadway roots. Staged as a cabaret rock concert with plenty of biographical interludes courtesy of trans-bombshell Hedwig (Seth Drabinsky), former East-German twink and lead singer of nonchalant indie band ‘The Angry Inch’, this production takes the audience through a tragic story of love, emotional and physical sacrifice, and betrayal.

The vast majority of the show rests on Drabinsky’s shoulders, and thankfully he is more than enough of a performer to hold it up. A classically trained singer, Drabinsky delivers the songs with power - despite a substandard sound system which sabotages the clarity of the lyrics. Although his falsetto was strained at times, this reviewer has it on inside information that Drabinsky was suffering from mild laryngitis the evening attended and was not performing at full potential. Character wise, Drabinsky walks a careful line between ‘larger than life drag queen’ and ‘tragic heroine’. If there is a flaw in his performance it is that he lacks the fragility to fully evoke the audience’s sympathy - but not by much.

Corrin’s greatest coup is in the gradual deconstruction and self-destruction of Hedwig. Even though there is a singular moment of physical transformation, Hedwig’s decaying emotional arc is drawn out tactfully.

Although fans of intelligent storytelling will be disappointed with Debbie Does Dallas: The Musical and hardcore fans of the film version of Hedwig and the Angry Inch may feel underwhelmed, Ghostlight delivers two edgy and fun-loving shows - a perfect antidote to the bleariness of November skies and daylight savings time.

Debbie Does Dallas: The Musical and Hedwig and the Angry Inch, produced by Ghost Light Productions, running as a double bill at the Theatre Centre in Toronto until November 8. For more information go here.