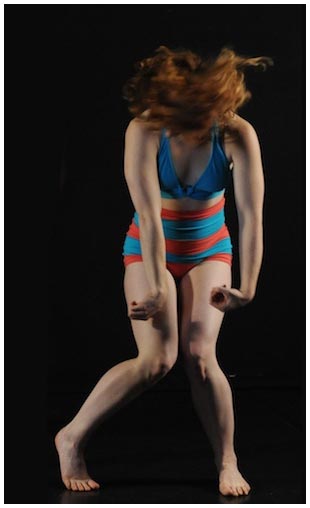 In Sara Coffin’s Dropped Signal, the set is made up of about eight weighted helium balloons on strings. Below them, two dancers (Jennifer Clarke and Sara Coffin) roll and move in low light.

When they stand, open and loosely balanced, they echo the slightly swaying, floating balloons, an impression that is reinforced later in the piece when faces and other images are projected onto the balloons. Like the dancers’ gentle presences, the balloons and the images projected on them are beautiful.  Are they thought bubbles? worlds? windows?  For me they evoked both the way the mind can be somewhere other than the body and the overwhelming simultaneity of the world.

Yet when I was watching this piece, I felt slightly frustrated, because I wanted something to happen. The movement seemed muted and suppressed. In the talkback after the show, Coffin said that the dancers had been given a very limited vocabulary and that one of the motivating ideas for this piece was that the dancers were trying to connect in some form of relationship, but they were not really connecting. The images on the balloons were from the “3D virtual world” of Second Life. So that made sense. In response to the poignant and provocative talkback question, “What would you do with this piece if you had $40,000 to develop it,” Coffin said she would attach balloons to the dancers’ arms and legs and run more projectors—in other words, ramp up the spectacular elements. I’d like to see that!

The bubbling sounds mixed and composed by Chris Kelly for Delia Brett’s He was swimming the other way and the languid, wavy, inhuman locomotion of the dancers immediately set an underwater mood for this MachineNoisy production.

After an evening of emotionally demanding soundscapes (I saw Program 3 after Program 4 on the same night), it was a pleasure and a joy to be invited into this quieter, fresh space where a strange sea creature (Laura Hicks) patiently moves and is moved by two other dancers, often fixing the audience with her gaze. As the creature traveled almost uncuriously across the stage, inching hips and back, curling fingers, flapping fin-feet, just doing what sea creatures do, I became very interested.  What would happen to her?  How would she move (or be moved) next? The movement speaks on multiple levels, occasionally making the audience laugh with little physical jokes, while also setting a peaceful mood and inviting curiosity.

In later sections of the piece, the performers (Caroline Liffmann, Tanya Podlozniuk, and Jennifer McLeish-Lewis) are more human. They make fishy-kissy noises, compete at a beach carnival (where the contest involves holding head-sized inflatable balls painted with a man’s face between their naked legs), and speak. Near the end, Podlozniuk has an extended conversation with one of the ball-heads, which descends from the ceiling on a wire.  The spoken language plays with tone shifts and repurposing, and is often very funny, but the movement introduced at the beginning continues to resonate throughout the piece and is never overshadowed by language.

My favorite poetry professor teaches that poetry acts on us through our intellects (with ideas and images) and through our animal bodies (with rhythms and sounds).  How much more is this true of contemporary dance, whose language can be visual, kinetic, musical, and alphabetical. In the talkback, Brett said that she thinks that, theatrical or not, it is all dance, as long as it comes through the body and is sourced in the body.  This piece reminds me how clever, unexpected, and wise that body’s ideas can be. Brett uses the resources of the postmodern stage to create a layered, evocative, witty piece of art. She opens up the myth of the mermaid with physically expressed questions about the lines between human and inhuman, male and female, impassivity and desire.  In this piece about seduction (among other things), the performers had me from beginning to end.

Sold Doubt, choreographed by Josh Beamish and presented by MOVE: the company, is all based on the songs, merchandizing, fan sites, and videos of the pop group No Doubt.  The excerpt opens with an energetic, lyrical duet between two men dressed alike. In a follow-up scene, a woman in a buttercup-yellow dress moves awkwardly across the stage, posing and saying narcissistic things. Another vignette shows a woman in a green shirt dancing to a song about feelings and loneliness. In the ending section a performer parodying Gwen Stefani gets laughs from the audience with her off-beat presence and her recontextualizing of the line, “I’m the kind of girl who hangs with the boys.”

In the talkback, Beamish said that he is trying to appeal to new audiences with this piece, and the program notes state the aim of studying “the presence of lyrical melodies within pop culture and of the enormous influence pop culture has on our daily lives.” Beautifully danced, sung, and otherwise put in motion by a talented group of  performers (Lara Barclay, Josh Beamish, Heather Dotto, Mackenzie Green-Dusterbeck, Angel Jutzi, Simone Orlando and Gavin Stewart), Beamish’s piece offers an opportunity to explicitly consider how pop music (with attendant dancing and videos) does or should participate in the tradition of dance-as-art.