Cozy Catastrophe: worthwhile apocalyptic tale has grown a little too much 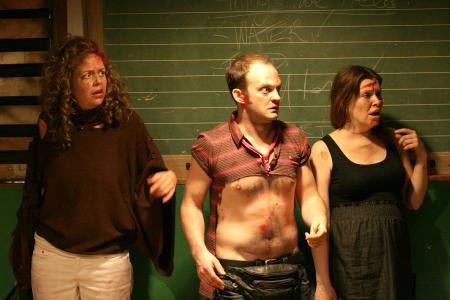 Getting cozy during a catastrophe are Juno Ruddell, Michael Rinaldi and Erin Mathews

Having seen the first incarnation of Theatre Melee's Cozy Catastrophe at Hive 2 in 2008, it was fascinating to see how this show has evolved. Now part of the ongoing Tremors Festival, the show has been expanded from its original form as a 20 minute short play into an 80 minute one act.

Although most of the development was worthwhile this otherwise hilarious and insightful play collapses under its own weight with a predictable, drawn out finale.

Leaving the Cultch, the audience is guided next door and into a basement that has been outfitted with a well balanced mix of conventional theatre set up and site specific detail. The basement we're observing is soon taken over by four characters running from some short of unspeakable horror (a screeching Godzilla monster? a horde of zombies?). The show starts with a bang. Tension is high as the characters attempt to make sense of their surroundings and what's happening outside. Throughout the show lights flicker, flash, and blackout. Thunderous blasts, monstrous screeches, and freezing winds can be heard from outside whenever the basement door is opened. Overall, the technical elements are one of the strongest parts of the show and help create a visceral experience. My only complaint: an irritating flickering green light that could be seen throughout the entire show on the right side of the house.

Cozy Catastrophe is an absurdist dark comedy that could easily be the love child of Jean Paul Sartre's No Exit and George A. Romero's classic zombie films. Horror is a genre rarely explored in theatre and it's refreshing to see it handled so well and with such an excellent mix of comedy and genuine tension. For the most part, the action is played fairly realistically and the acting is solid across the board. Unfortunately, there are a few moments that feel out of place: specifically, a silly, slapstick routine involving a relay of cups that is played for laughs only and is completely inconsistent with the tone of the show. Moments like this detract from the much more sinister undercurrents and were these moments simply cut altogether Cozy Catastrophe would be stronger for it.

Character is the main focus and it's a pleasure to laugh at these ridiculous human beings and their dismal situation. Our four 'heroes' consist of; a horny barista with girlfriend problems; a do-gooder whose shirt keeps getting ripped off; a yuppie with a penchant for looting; and a pregnant catholic who's just downright stupid. Given how silly all this could potentially be it's surprising and refreshing when the show has a ring of truth. At one point the group tries to figure out what useful skills they posses and come up fairly short. Cosy Catastrophe serves to remind us how useless most of us would truly be in this situation. These characters never seem to really listen to each other either. When one of them reveals a heartwarming truth or wants to share an idiosyncratic memory, someone else speaks up and takes the spotlight, as if to say "Okay, you're done. My turn." Everyone's self involvement is so deeply rooted and herein lies the problem. How are they going to get out of this scenario if they can't even listen and relate to one another?

Unfortunately, the show wraps up by treading through some familiar horror movie scenarios and then abruptly ends. The true fear presented in Cozy Catastrophe comes from not knowing what we're afraid of. Once it's revealed the tension is lost as the script gives way to predicable horror clichés. This is almost justified by a fantastic sequence involving a series of blackouts. However, the following denouement fails to be original or poignant. There's also a repetitive formula at work here. Hilarious banter will lead into a serious moment and then be followed by a morose pause as the characters contemplate their fates. Some careful pruning of the script and a tighter finale would make for an excellent show.

Despite its flaws Cozy Catastrophe is still worth seeing. Moreover, The Tremors Festival offers some excellent bang for your buck. A three show package for under $30 along with several events such as showcases and play readings.

For more information on the show and Tremors flee here.