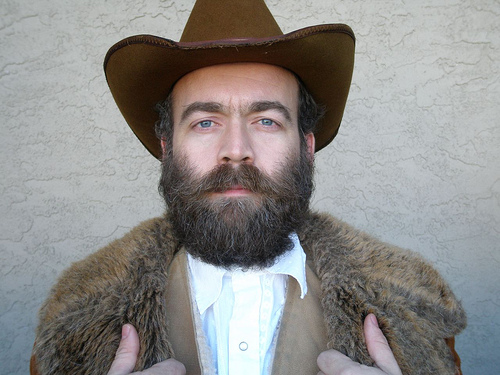 The UNO festival, by it's very nature, has its limitations; there are only two venues, and no production has more than three shows. Some shows deserve both a larger venue, and a longer run, if only to accommodate the number of people who want to see them.

Case in point is Cariboo Buckaroo, which sold out its second show, and will, no doubt, sell out it's third, and final, show (Saturday May 29) at the Intrepid Theatre Club. Ideally Buckaroo should have been given room to breathe in UNO's other venue, The Metro, rather than Intrepid's cramped club. That way more people would have been able to see Theatre SKAM's latest offering in relative comfort. This show would also have found the larger audience it so richly deserves.

Written and performed by SKAM founding father Matthew Payne Cariboo Buckaroo tells the tale of a mid-1800's cattle drive. It's a prodigious effort from Payne, who, like his main character, is a seasoned pro. It may be a lot of work, but he makes it look easy. Buckaroo is a self-confessed "crash course in BC history" that takes us along for the rough ride on the western trail.

An artful use of props moves the story along quickly, which is a good thing, because Buckaroo plays out at almost and hour and a half. Nothing feels rushed however, Payne seems quite at ease taking his time, although the vast number of historical details tend to bog down the narrative on occasion.

Although Payne is the only person onstage, he inhabits that space with the help of his set designer, light designer, costume designer, and scenic artist (Carole Klemm, Keith Houghton, Erin Macklem, and Diana Nielsen respectively), all of whom provided elegant and inventive touches to the scenes.

Let's hope the next time this Buckaroo rides into town he can find worthy location to tell his tales. We'll be waiting.