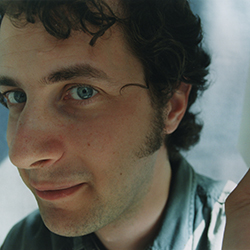 Burn Job is written and performed by TJ Dawe. This is his 13th appearance at the Vancouver Fringe and his 106th Fringe overall. 106 Fringes!

Dawe's sit-down monologue takes you on a mesmerizing 75-minute journey. It is hard to say if it is a play or more of a motivational seminar on spiritual enlightenment. He could be successful writing a self-help book. It is the story of his life told in a very meaningful, intelligent, informative and humorous way.

TJ Dawe is absolutely one of the Fringe’s greatest storytellers, and Burn Job is another impressive achievement in Dawe’s ongoing search for himself. The first line of the monologue grabs your attention immediately:  “The first time I ever did acid, I set a massive field ablaze.” But as we’re waiting for the rest of that adventure, the performer takes us into wormholes about the various cast-off obsessions of his youth: Marvel comic books, Top 40 radio, A Clockwork Orange, mid ‘80s hits.

His stories are exquisitely and creatively crafted. Parts of the story are simply funny (his teenage friend’s badass pranks), parts informative (I learned a lot about holotropic breathing, Anthony Burgess and bunch of other things), parts philosophical (his perspectives on both youthful silliness and struggles; and adult self-deception and self-seeking). The story is intelligent, nuanced, and generous. Sometimes you feel like you are lost in the stories, but he brings you back with a moment of perfect silence.

Burn Job is about that part of growing up in which you leave behind some aspect of your old life, and distance yourself from it as something new arises. Burn Job came to be after Dawe participated in a session of holotropic breathwork – a breathing technique that brings a person into an altered state, comparable to being on LSD or ayahuasca.

In the aftermath of his breathwork session, Dawe came to see this pattern of slashing and burning his past, and six months later, wrote the script for Burn Job.

Dawe’s stories are mixed with numerous music tracks and sound effects, manipulated by Dawe live on stage which is very creative and makes the show even more interesting and entertaining!