Black Comedy: getting to the orgasm of farces 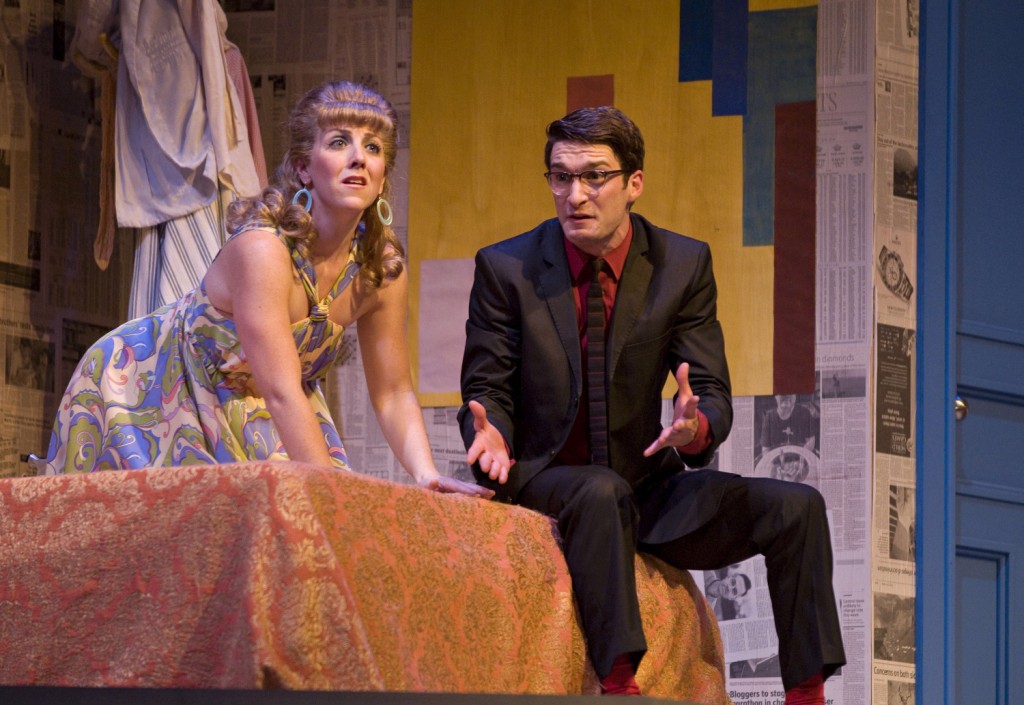 A Buddha statue sits prominently downstage centre, radiating out a message to the audience: “keep your eye on me, something terrible is about to happen to me”.  The anticipation of disaster and predicting which of the various elements will likely go wrong is at the core of a work like Peter Shaffer’s Black Comedy, currently in production at the Arts Club.

You know from the start that the Buddha is in danger and the joy comes in is seeing when/how the object will ultimately meet its demise.  It’s kind of like sex in that you know there should be gratification at the end and you know what that gratification should feel like, what is in question is the techniques and abilities of your lover(s) use to get you to that holy place.

A farce sets rigorous challenges for a director and performers and, like sex, if the timing is off, if there is a lack of understanding in how the piece is designed to function in time and space then the whole thing collapses with horrible results. Fortunately, Dean Paul Gibson and his talented cast of lovers meet the challenge set by Shaffer.  Basically a high concept piece, Black Comedy is about Brindsley Miller (Charlie Gallant), a young sculptor, who on the very night he is about to be introduced to his fiancé’s terrifying father, a colonel in the army, he is also due to host a potential millionaire patron named Georg Bamberger (the woefully underused Simon Webb, who is on stage for maybe thirty seconds). Just before the guests arrive, a fuse is blown and the whole house, including Brindsley’s flat, is plunged into darkness. When the lights are on for the characters, the stage remains in darkness but as soon as the fuse is blown the lights come up and the play revolves around the audience watching the characters struggle in the dark, groping one another, moving furniture and revealing secrets.

The furniture has to be moved because Brindsley and his fiancé, Carol (Julie McIssac), in an effort to impress daddy and the patron, have borrowed without permission several precious pieces from their neighbour’s flat. Naturally, the neighbour, Harold Gorringe(Jeff Meadows), arrives home early from his trip and Brindsley is forced to use the cloak of darkness to shift the furniture back to where it belongs; including the most precious of the precious the Buddha statue (and I have to say, I worry about Gorringe’s ability to apprise artwork as the Buddha looks like one that could be had down on Pender Street for $2.99).

Although I initially thought he was slightly miscast (and mis-dressed, he looked so fucking cool in his two-piece, pencil thin suit, killer boots and big specs), Gallant gives such a tremendously committed, physical performance, especially with his fall down the staircase, that in the end he is full value. McIssac gives a great dolly-bird interpretation of Carol, although I suspect in the original she had a bit more slumming posh-bird to her.  Simon Bradley as Colonel Melkett has a lot of fun on stage and Nicola Lipman, as the tea-total neighbour who discovers drink in the darkness, is a real standout and is note perfect.

My only real quibble with Gibson in terms of the physical action is that at times there is simply too much going on. Sometimes you want your lover to focus their attention on one spot and I wished Gibson had tightened the focus more often. My eyes were often darting from one physical activity to another which meant that I never got the full pleasure I should have – kind of the tease without the payoff, I guess. The piece also starts to lag for me in the last fifteen minutes or so. I think in part this lies in the pacing but mostly with the script where a longish sequence with an electrician adds little despite Sean Devine’s best efforts to inject some energy.

Being Shaffer this is hardly just a casual lay; there is a black – or, maybe more appropriately, hard – core to this work.  When “former” girlfriend Clea (Sasa Brown) appears in the darkened flat, we soon learn that Brindley is actually a liar and slowly the charmingly bumbler becomes not so appealing after all. In addition, certain depths are hinted at (at least in this production) in the relationship between Brindsley and Gorringe that makes it seem that London was perhaps a little more swinging in the 60’s than I had originally appreciated. At least I hope that I’m right in assuming that Brind and Gorringe were keeping themselves warm during the dreary, winter nights as it does mitigate somewhat from the mincing, faggy stereotype (and the accompanying longing for the straight guy) that the play casually lapses into and which Meadows, for the most part, keeps just this side of.

Black Comedy is teamed up with an Anton Chekov short, The Marriage Proposal, which opens the evening – a bit like the cartoon before the feature. The three performers - Bradbury as the father, Brown as the daughter and Meadows as a neighbour/suitor – deliver great clown work overtop of what is, in effect, a one-joke piece.

Finally, like most people, I want my lover to set the right mood in terms of décor and lighting. Unfortunately, I can’t say I was too sold on the set design by Ted Roberts, which was too loud and on the nose for my taste. For The Marriage Proposal a massive reproduction of a Wassily Kandinsky painting is used as a backdrop. Elements from the painting are then echoed through the Black Comedy set (which also includes walls plastered in newspaper print in place of wallpaper). I just wasn’t sure how or in what way either of these pieces is linked to Kandinsky, a contemporary of neither – unless they are all included in some sort of modernist sweep. In his director’s notes, Gibson says that the Kandinsky was used to provide a playful counterpoint to two playwrights who were, themselves, at play. I’m just not sure it was suitable, especially for the Shaffer.  Although impressive to look at, I’m afraid that the set was simply too vibrant and cartoon-like for a play that already had so much going on.

Still, that aside, it’s great to see the Arts Club kicking off the season with such style and fun.

Black Comedy continues at the Arts Club Stanley Theatre until October 11th. For more information why not bumble here.