after the quake: quietly superb 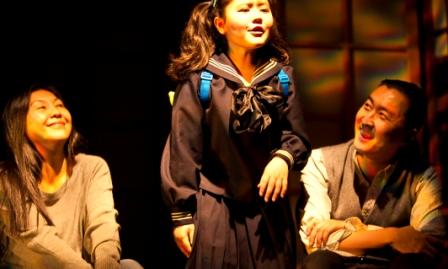 Manami Hara, Leina Dueck and Testsuro Shigematsu are seen after the quake, photograph by Ken Bryant

Pi Theatre and Rumble Production’s joint presentation of after the quake is a stunning piece of theatre.

Each of the theatrical arts – directing, writing, acting, and production design - work eloquently together to bring the play to life. It is rare to experience a show where all these elements integrate so well and are so delicious to watch.  A delicate feast for the senses, the play explores how imagination can heal the wounds of loss and fear.

Based on Haruki Murakami’s stories and adapted for the stage by Frank Galati, after the quake weaves storytelling with reality. A young girl named Sala (Leina Dueck) has nightmares about “The Earthquake Man” after the Kobe Quake of 1995, and is soothed by the fantastical stories of a family friend named Junpei (Tetsuro Shigematsu).   Enter Frog (Alessandro Juliani), a superhero who will save Tokyo from the destructive power of earthquake-causing Worm.   Through Junpei’s storytelling, the power of imagination is harnessed to cope with the emotional wounds from a devastating natural disaster. During the play, the epic of Frog and Worm intertwines with the subtler drama of human life as the old love triangle between Junpei, Sala’s mother (Manami Hara) and father (Kevan Ohtsji) is revealed.

Yvan Morissette’s set design is an exquisite, screen and wood structure that holds together the two worlds of the play.  Sliding doors and small cubbies make the static set rich with versatility. Itai Erdal’s lighting design transforms the set into an expression of visual poetry. The Artistic Directors of Pi Theatre and Rumble Productions – Richard Wolfe and Craig Hall, respectively – co-directed the production. While I would be curious to know more about how their directing dynamic worked the result of their collaboration is a seamless vision of human connection and transcendence. While all the performances are moving, Juliani’s physical dexterity as the hero Frog is particularly evocative and entertaining.

Subtle, tender, and beautiful, after the quake invites us to see the hero’s journey that is present in everyday life.   I loved it, go see it.