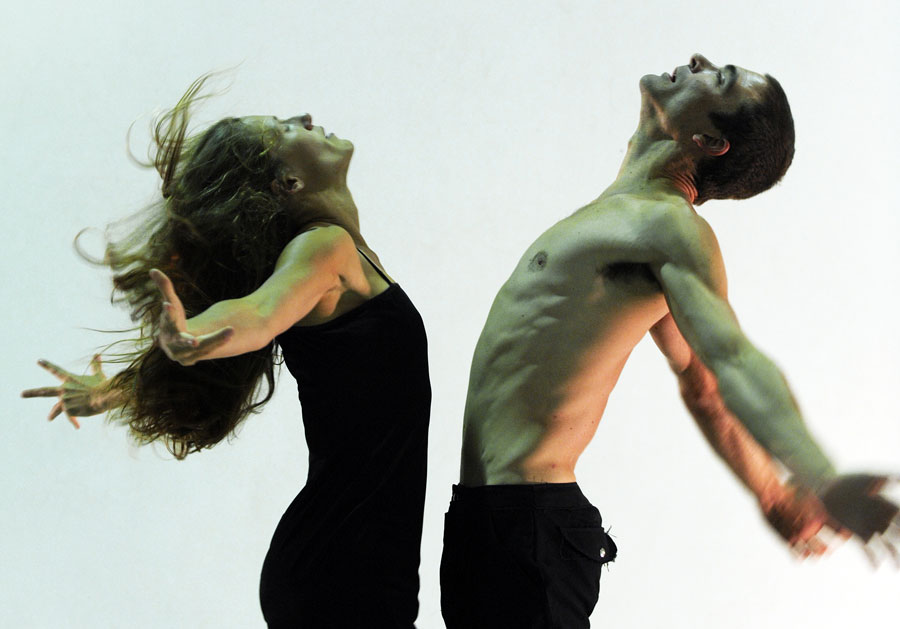 Naked, beautiful, natural, and perfect symbols of the male and female bodies, dancers Alison Denham and Billy Marchenski, in one full hour of a most intriguing interpretive performance, tell a history of man and woman, of the body and the soul. A piece of intricate choreography ranging from animalist primal movements to sophisticated modern gestures, their bodies reveal the rawness and the evolutionary change of the human form.

The choreographer, Alvin Erasga Tolentino, collaborates with the two dancers to weave together a unique and deep expression of man and woman. The conclusion is the masterfully interpretive dance performance of ADAMEVE MAN-WOMAN.

The stage and back wall bathed in white paint is the set. The piece opens with a dimly lit stage; two figures slowly enter the shadows in light, the audience unsure whether they are male or female, clothed or nude. It is a discovery in the human form, for the dancers and for the audience. James Proudfoot, the lighting director, skilfully plays with the mood with color reflected on the white, enhancing the movement and shape of the dancer’s bodies.

They are born - one male, one female. Their bodies are new to them, their movements raw and angular, unformed. Through the first segment of the piece, this rawness develops as they discover the capability of their own shapes and body parts. As the piece progresses their awareness grows and their figures become more human-like, reaching the proud and erect humans of today. Entering into the second section of the piece and clothed, this newly formed human body they come to realize has feelings, emotions, sensations. Their whole shape and persona change as they individually experiment with their new form. A further world of investigation commences as they meet as man and woman. Here the realization of the attraction and that potential reveals new awareness. They intertwine as a couple, experiencing all that comes with a relationship. The final section I read as the culmination of the male and female form. They wind around, over and under each other creating no differentiation between one another; they are one, existing in harmony.

With the use of a unique manipulation of sounds through electro-acoustic music, (music and sound design, Jeff Corness) we are carried along this transformational journey. I was particularly amused by the use of non-conventional sounds from strings instruments. Although I was engaged by the music and performance for most of the performance, by the end I was feeling the lengthiness. The music gently put me in a trance and as the bodies continued to spin around the floor, I felt more and more sleepy – ten minutes earlier I would have been in a different state and I think quite ready for the finale.

These artists however are not only talented dancers but in this production they demonstrate skill as dramatic performers; their facial expressions and theatrical movements weaving between dance and theatre. At one point, as they walked towards the audience to the front of the stage, completely naked, I thought these are superlative representational specimens of male and female. ADAMEVE MAN-WOMAN could not be a more perfect piece for this couple.