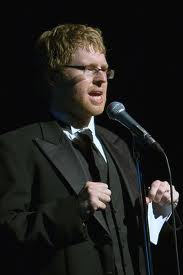 Just last week I had the opportunity to meet with David Jordan on Granville Island and chat about this year’s festival. Due to the new office space, I went on a bit of a hunt to track him down working upstairs in a room filled with unpacked boxes. Though I had invited him for coffee, we ended up hanging out in his very busy office space (as he ate lunch which just means the Fringe is nearly here). Enjoy the conversation!

QUESTION ONE - What’s great about the 2013 Vancouver Fringe Festival?

Well, it’s going to be a great festival because we got a new office! And we are offering more programming before and after the festival. We’re aiming to develop our Fringe audiences by offering performers (such as the uniquely talented Peter’n’Chris) and shows (Big Shot, Jake’s Gift, Brief Encounters with Fringe artists) that we think everyone should see. We are also continuing to reach out to our core East Vancouver audiences by adding a new mainstage venue at the Cultch’s Historic Theatre which joins the Havana and the Culture Lab. And if you’re hungry, you’ll be able to experience food truck heaven at our Food Truck Fest (happening on the first Fringe weekend). We at the Fringe are SO happy about the recent Food Truck Explosion!

QUESTION TWO - What did you see at other Canadian Fringe Festivals that isn’t coming to Vancouver in 2013 - but you really wish it was? Why?

I attended the Edmonton Fringe - and thought Little Pussy was outstanding, just a perfect solo show (luckily it will be in the Vancouver Fringe). What did I want to have here was Assassinating Thompson by Monster Theatre about the Group of Seven. However, Vancouver audiences will have a chance to see this fine show at the Firehall in October 2013.

QUESTION THREE - Have you ever gone to the Edinburgh Fringe? How does it compare to Vancouver?

I’ve never been to Edinburgh. I know that they just broke their box office records - but they do it by adding more and more shows. Unlike Vancouver (and the other Canadian Fringes), Edinburgh is not an artist-driven model but rather a showcase opportunity. Here there is a great deal more support for participating artists including venue, box office, technical support and marketing. Perhaps I’ll go to Edinburgh next year so I can preach the Canadian model!l

QUESTION FOUR - Tell me about the WORST Fringe Show you’ve ever seen. No holding back - tell the Truth and Shame the Devil!

Well… I remember one show that I saw in Montreal where the performer was so desperate that the audience clapped because he seemed to need the affirmation. My experience with the Fringe is that the role of an audience member is different - the audiences come willing to experience new work created by both professionals and amateurs. And as the Executive Director of the Fringe, I do not have a critical relationship with the show. I think that people do the show they need to do.

It is a strong contrast to the typical curatorial model of being a festival presenter who chooses what shows are in their festival. Sometimes, audience members will ask me WHY I allowed certain shows in the festival! Every chance I get, I talk to people about the lottery system of the Fringe and its role in artist development.

QUESTION FIVE - It looks like there is a lot of additional programming this year at the Barefoot Wine & Bubbly Stage near the St. Ambroise Fringe Bar. Every night has activities. Will this programming compete with the Fringe shows produced by participating Fringe artists?

No, I think not. These activities are meant to augment the festival. It’s part theatre, part party! We are including casual music which is intended to enhance the festival atmosphere, to help create a social hub and to encourage conversation. And I can tell you that overall show attendance has increased as we have added more entertainment. A festival is a celebration, not just a collection of performances.

QUESTION SIX - Just how important ARE volunteers to the Fringe Festival?

In terms of numbers, we have about 12,000 volunteer hours in a year. At $10 / hour, the value of that volunteer work is $120,000. Our volunteers spread the word about the Fringe, they share our stories with the community. So the answer is - very important!

QUESTION SEVEN - Plank Magazine has caused some controversy in past year with its frank reviewing style and aims to be known for “Spanking the Ass of Culture” - how do you think that Plank reviews fit in with the spirit of the Fringe?

I think that Plank’s vow to review ALL of the shows is a true reflection of Fringe spirit. It’s about inclusivity - that your reviewers will review everything (there is no avoiding or choosing). Also, for the Fringe there is a mix of regular and amateur reviewers (in fact, some reviewers ONLY cover the Fringe just like some Fringe audiences only attend Fringe shows). There is an openness - a desire to create dialogue. And as for the controversies, Plank has always embraced the comments and engaged in public dialogue online.

QUESTION EIGHT - In past years, the Plank Fringe Review team has tried various means to assign the shows randomly such as assigning shows alphabetically. This year, we’ve been inspired by the Fringe itself and held a mini-lottery to see which reviewers won the right to see which shows! Do you have an idea for how we can randomly choose shows for our reviewers next year?

A: I think that out of a hat is PERFECT! That’s how we continue to do our Fringe lottery year after year! It’s a subversive act in an arts culture that prides itself on excellence. We challenge our audiences to be your OWN artistic director - choose what YOU want to see.

Our Fringe Concierges are drawn from the volunteer pool - they are not experts. They will help people who need a bit of a kickstart on choosing shows! And perhaps another year, we may try to do a workshop about choosing shows (in Edmonton, they offer a workshop led by longtime Fringers who tell the attendees about how they choose shows).

QUESTION TEN - Can you explain the Free Fringe Toast to me? In the brochure, there is a chick clutching a piece of toast… colour me confused. Enlighten me, please (it also says “weather permitting”)?!?!?

(Laughing.) It’s my eighth festival as Executive Director and my first whim! I just said: “Make it so.” It’s pure silliness. It makes people laugh! It’s celebratory. Who doesn’t like toast?

QUESTION ELEVEN - Give me the plot for one of the following fictional Fringe Shows:

OPTION ONE - Super Pugs of the World Unite!
OPTION TWO - Look at ME! I’m Queen of Vancouver!
OPTION THREE - 37 Reasons You Should Fall In Love With My Sister

Obviously, Look at ME! I’m Queen of Vancouver is about a woman desperately seeking attention who builds a hot-air balloon in her own image which will be launched on a solo flight from Granville Island. It could be a site-specific show and the one audience member would be able to ride in the balloon! I would definitely go see that.