Beggars in the House of Plenty: a misdirected play about a lost family 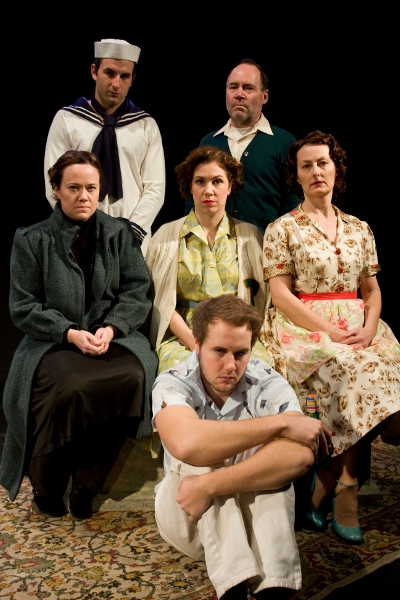 Family life can be hell: beggars in the house of plenty

This production by the "Evolving Arts Collective":http://evolvingartscollective.com/ misses the mark, though it is not for lack of trying. The costumes, the set, and the lighting have all been thoughtfully designed. The actors are talented and invested. But despite these earnest good intentions, the show flounders in mediocrity.

*Beggars in the House of Plenty* is the story of three children and their parents seen through the eyes and memory of the youngest son. It is not pretty. Though occasionally funny, the family dynamics are ultimately malicious and destructive. Perhaps part of the problem with the show is its unrelenting darkness. Do we really need such a depressing show right now about an unredeemable dysfunctional family? What is the draw to do this play now? The economy has crashed, times are tough. It’s not that I need my entertainment to be shiny and bright, but if I am going to wallow in despair and rage, then I want there to be a solid pay-off for my sacrifice. In Beggars, there is no redemption, no light, no lesson, no shining spirit of humanity. Director Sophie Ann Rooney writes that playwright John Patrick Shanley “deals with his personal and family demons in such a pure, unapologetic way that it is impossible not to relate”. While this may be true, no one will want to. Art should edify or entertain. Both if we’re lucky. This production does neither.

The first act of the show waffles between absurdity and realism, which leaves us in no man’s land. I frequently found my attention drifting, which was a shame since the actors were trying to step up. But without a solid context for the action, I had trouble staying interested. The few moments of actual connection between the characters, such as the relationship between the two brothers, Johnny (Kyle Labine) and Joey (Drew Nelson), are a notable relief. But these flickers aren’t enough to support the whole show. Drew Nelson’s charming blend of machismo and vulnerability is a good start, but sadly, we lose him to insanity in the second act.

Perhaps if Rooney had directed the first act to be more absurd (think Christopher Durang), then laughter could have provided a stronger lifeline to the story, or at least taken us out of the strange no man’s land in tone. Rooney’s mission to “bring to life a truthful telling of this Shanley story” may have rooted her too closely in naturalism, which was confusing since the play is not realistic. If the comedy and love of the play had been more explosive, perhaps the underlying darkness would not have been so unforgiving.

The second act of the play is basically just a regurgitation of the family dynamics in an abstract variation of hell. After the brutality in the first act, seeing the family relationships replayed in limbo just seems macabre. We get it already. Again, I wonder about the play’s structure. Would it be possible to find enough comedy in the first act to make the second act less of a repeat? Or to make it more clear that the second act is really an illusion? The fuzziness of the genre washes out the clarity of the story; I spent most of my time puzzling out what I was watching rather than engaging.

This play is undoubtedly a challenge to produce successfully (or even clearly). The writing is a high-wire act of despair and hilarity. Although I could see that they try to touch both ends of the spectrum, Evolving Arts’ production just seems to get lost somewhere in the middle.