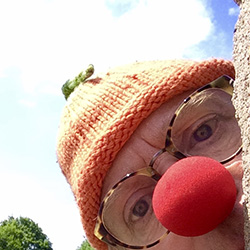 Let me start with the positive things, as there were some. The most enjoyable thing about this spectacle was the music. The songs ranged from classical opera to Latin influenced music with a few more modern classical types thrown in. There wasn’t a single one I didn’t enjoy listening to and that didn’t perfectly fit the mood that Thomas 'MUDD' Monahan was going for. A new idea was presented that I’d never seen before: a clown in a war and possibly with PTSD, although I can’t say for sure that I was right on the last one. I also enjoyed his gibberish language that seemed to be a mishmash of Latin-based languages reminiscent of Simlish from The Sims video game. Monahan was fully in character and drawing us into his experiences with a full range of believable emotions and his miming, at times, was good.

And that’s where it ends.

This was a dark comedy that wasn’t very funny nor very dark. Monahan seemed to be deliberately crude, with no rhyme or reason to be such. One of the very first things you see is him come onto the stage stark naked. I never did figure out what that had to do with anything. There were a lot of confusing moments where it took a while for even the main message to sink in. He appeared to have a friend at the beginning who overdosed, but his friend was a box and it was possible he was an imaginary friend… I spent a while trying to figure out who Whodoo was, and my conclusion was that he was God, maybe? It was very fitting that his jacket had a big question mark on it, the play is confusing and without any discernible point.

Should Monahan go back to the drawing board and revamp this story more clearly and with a through-line, it’s possible that it could be a decent show. He has the building blocks, but as of yet, they are scattered everywhere.

Editor's note: The flyers for WHODOO do describe the piece as being post-modern, which perhaps contextualizes the content more appropriately than the image and show description listed in the official Fringe Program Guide.