When Harry Met Harry: brilliantly alone with himself 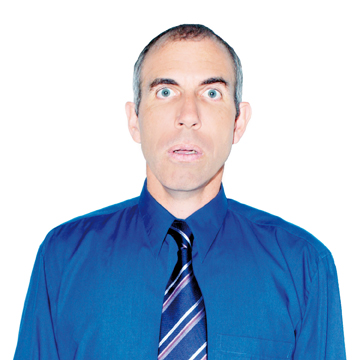 Allan Girod has a captivating physical presence on stage. He is truly mesmerizing. I liked nothing more than watching this six-foot-nine Australian man contort himself into a child, a louche motivational speaker and an asocial perfectionist.

When Harry Met Harry introduces us to a lonely man so isolated even from himself his dreams retell the moment he was abandoned as a boy. (Hats off to the lighting design for the eerie mindscape.)

Girod’s flawless control of his long limbs transformed the stage. He built his characters on the physical movement and shape of their bodies, transforming his own to fit their contours.  In the lead, he bends like a paper clip, tense and rigid and useful in limited applications. Harry is almost claustrophobic in his avoidance of people and he pursues a love affair with routine, a down-to-the-second schedule so precise his most intimate lover his clock. (He licks it.)

Harry works in print ordering—he’s a human photo copier—and life is bliss and solitude and loneliness until he’s forced to attend a team building workshop. Harry is so adverse, he tries to maim himself by way of excuse to skip out.

But something funny happens as he’s sitting on a whoopee cushion, emitting pockets of rubberized fart in front of the peers he seems to loathe so much. He’s out of his element, he’s interacting with others. In new ways, he’s interacting with himself. Then he begins to interact with the world, maybe for the first time.

Watching Girod, I forgot he was alone on stage.

When Harry Met Harry is on as part of the Vancouver Fringe. For more information go here.