The Weeping Salsa: a difficult investment 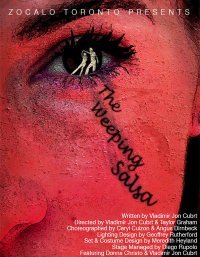 Written, directed and performed by Cubrt, The Weeping Salsa tackles the dynamics of passion and subjugation through a mixture of drama and dance.

The dance elements are certainly the highlight, as both Cubrt and his co-star Donna Christo deliver solid performances. Their technique is strong, and Caryl Cuizon’s choreography is sexy and, occasionally, harsh. Lighting by Geoffrey Rutherford is basic but strong. This Toronto-based production is an adventure, giving many fresh contributors an opportunity to build their professional resumes. Rutherford is one such newbie, as is Diego Rupolo as Stage Manager. Cubrt, himself, is new to the craft of creating, rather than simply performing theatre. It shows a bit – but not enough to bother an audience willing to give the idea a shot.

The story takes place in flashes over the course of eight years, all centered around the Canada Salsa Congress. It begins tantalizingly with the silhouettes of a couple, dancing close and sensual, projected onto an off-white sheet stretched over the small stage. Air slowly seeps out of the sheet, and it crumples into the background to reveal the plain set. A lanky, stretched-looking man (Cubrt) sits Stage Right, waiting, while a woman (Christo) awakens confused and hysterical. We soon learn that her ex-boyfriend, Danny, drugged her in public and took her back to his apartment to rehash what happened to their relationship. Dances infiltrate the drama, as it tracks the degeneration of the once romantic relationship between competitive dance partners.

Well executed but fairly traditional Cha Cha and Latin staples tie together key scenes that depict Danny and Adele’s relationship as passionate, intensely physical, obsessive and co-dependent. Neither character is particularly sympathetic, so it’s a bit difficult to become invested in their fate – especially knowing from the get-go, their so-called love winds up in abduction. Danny is paranoid and whiny, while Adele is spineless and somewhat manipulative.

My guess is that Adele is meant to be likable, but it takes an exceptional and insightful writer to create a respectable heroine who (A) stays with an abusive, childish boyfriend for four years, (B) goes back to him to try to –what? – be friends, (C) lies to her never-seen fiancé about her whereabouts, passing up a clear opportunity to call for help, (D) promises to be there for her psychotic ex, be his friend, be whatever he needs if he’ll just let her leave the confines of his apartment.

Nonetheless, she is the highlight of this production. Donna Christo’s performance is sensual, intense and passionate. Cubrt is a poised partner for her, but neither his acting nor his dancing stack up to hers. I applaud him for creating a vehicle to discuss domination, sexual magnetism and parasitical behaviour between lovers. The Weeping Salsa is worth seeing, but I expect to see greater things from Cubrt, once he gets his feet on the ground.

The Weeping Salsa, produced by Zocalo Toronto, ran from November 15 to 29, 2009 at The Theatre Centre in Toronto.