War and Peace — Did You Get All That? 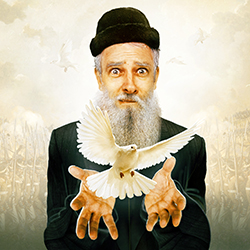 Covering all of Leo Tolstoy’s mythically long-winded novel is no task for mere mortals, but Ryan Gladstone is up to the task. War and Peace is a funny, smart, and heartfelt treatment of one of history’s greatest works of literature.

The story is told in many layers: the plot of the novel itself, often played straight but poked fun at when necessary; the echoes of Tolstoy’s own life, including his depression and his youthful habits of gambling and womanizing; the historical context of the Russian setting; and the context of Tolstoy’s own writing of the novel, including the fact that his wife had to transcribe every word because no-one else, it seemed, could read his handwriting (himself included).

There are moments when all these layers align like the lenses of a telescope to give even the uninitiated a glimpse into the world of the Tolstoy buff, and into the vision that underlies this famous novel. In other moments though, things get a little dizzy.

Many artistic projects involve condensing enormous amounts of information into a tiny interval—a challenge as tormenting as it is tantalizing. To me, it seems there are two main approaches to pulling it off:

Though wonderfully committed, Gladstone’s performance seems to fall in between. I found him too easily sidetracked for 1 and too concerned about time for 2. His constant checking of the clock had the unfortunate effect of making me anxious about the time. Still, this may only have been a hitch of this particular performance; and outside of the problems one would expect in covering this whopper of a classic novel, Gladstone’s War and Peace is a wonderfully rich and humorous performance.