Uprising and In Your Rooms: The Very Original Imagination of Hofesh Shechter 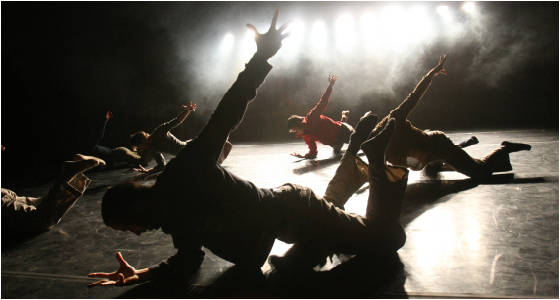 Hofesh Shechter’s two pieces “Uprising” and “In Your Rooms” collectively crashed over me like a thunderous wave whose power washed me ashore and left me wanting more.

The first piece, “Uprising,” is a 26 minute ensemble piece for seven men. This is a piece that gallops and plays with the theme of masculine identity; it is fast, it is highly kinetic, at times it is violent, and always it is forceful, but in a way that is skilled and precise, so that in spite of the visceral power on stage, there is also an attention to detail that elevates this work from raw to the level of virtuosity.

The first thing to strike me about “Uprising” was the dramatic use of lighting. I love a stage that is bare – it gives more room to the dancers – and in “Uprising” the empty stage was brightly lit exposing not just the stage and the dancers, but the full height and depth of the space, thereby allowing the dancers to fill all the corners with their powerful dance. And Hofesh Shechter’s choreography definitely needed as much space as it could get. Throughout the entire piece the movement vocabulary was bold and original. And it was fast, I already said that, but it merits repeating because these men were dancing so quickly and with a staggering level of precision and unison. They were so together that, as a group, they gave the impression of being a single celled organism, bound together by an elasticity that seemed to allow each dancer the capacity to perfectly anticipate and roll on the waves of the other dancers’ momentum.

Thematically, “Uprising” felt fairly serious, but I should say that there was a delightful moment of levity when the dancers delivered backslaps to their fellow dancers until it evolved (devolved?) into a kind of dancing brawl suggesting the fine line between masculine play and masculine power struggle. The insertion of this moment of clever humour created a change in pace that beautifully demonstrated Shechter’s diversity as a choreographer; he brought these dancers from serious to lightness and back to force again before wrapping up this piece all too quickly. I admire Shechter for leaving this piece so short. By having us exit the choreographic party while it’s still fun, Shechter preserves the integrity of the piece and allows its full force to be felt throughout and not diluted.

“In Your Rooms” was a somewhat more subtle piece that took me on a ride that felt, at times, dreamlike and at times seduced me with its crackling energy produced by the skill of the entire ensemble that makes up Shechter’s company. Once again, the use of lights and other stagecraft was mesmerizing. The live musicians (strings, percussion) appeared from the darkness as though floating high up on the back wall of the stage and then disappeared as though they had never been there, the precise lighting would illuminate one area as though creating a well-demarcated room for a single dancer or for a duet before the stage opens up and becomes a vast canvas for the lithe and expansive movements of all the dancers. Part of what I loved about this piece was the mystery of it. There was, at the beginning and then again at the end, a voiceover that reflected on order and chaos in the cosmos while the dancers seemed to be involved in their own, equally profound, journey in and out of order and chaos all while throwing their bodies around with such primal effortlessness that one could easily imagine them as the original life forms crawling out of the sea, or as a dream-like figment of a very rich imagination.

Although “In Your Rooms” was somewhat less obvious than “Uprising” in its themes, it was equally beautifully choreographed and contained the same originality, speed and power, though interspersed with some softer, almost surreal moments of reflection. What this piece managed to do so well was to alternate between forcefulness and subtlety, with each face of this choreography being exceptionally wrought.

Both pieces excelled in their capacity to weave together daring choreography, compelling themes and outstanding dancing as well as beautiful use of the stage. Even a brief immersion in the world of Hofesh Shechter is an opportunity to explore the outer reaches of both technical virtuosity and creative expression of what is, clearly, the very original imagination of Hofesh Shechter.