UnCouth - It's All In The Title 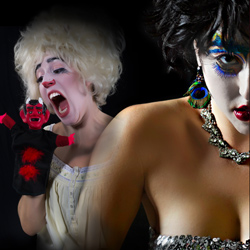 Uncouth. A two-syllable word. Kind of catches in your mouth as you utter it, a sensation emphasized in the show’s title by an extra capital letter: UnCouth. There’s that hard ‘c’ in the back of your throat, followed by an elongated vowel sound slowly traversing the length of your mouth to the tip of your tongue, finally ending when your tongue touches your teeth in that closing ‘t-h.’ The sensation of pronouncing the title is mirrored in the phenomenon of seeing this show; it grasps your attention and sticks with you long after you’ve left the venue. Granted, I have personally been exposed to very little physical theatre, but UnCouth caught my attention from the get-go and I’ve thought of little else since.

Windy Wynazz’s performance is mesmerizingly awkward. As the title suggests, her performance is deliberately unrefined and it is also entirely character driven. She conveys a Lena Dunham meets Liza Minelli amalgamation, kind of like Girls’s Hannah Horvath meets Cabaret’s Sally Bowles. There’s a raw honesty to Wynazz’s character underneath all the circus and burlesque. UnCouth sees Wendy Gross, a nervous nightgown-clad girl taunted by Barbie dolls and hand puppet therapy attendees, transform into Windy Wynazz, a manic, sexy and powerful woman flaunting fishnets and lingerie. Seeking fame, she embarks on a series of costume changes, audience interactions, and consultation sessions with the devil (also a hand puppet) to attain it. By the end of the play I’m still not sure if the character Windy attained fame or not; what is more important is that the actress Wynazz had captured the hearts of the audience from the very start of the show.

Wynazz has a paradoxical stage presence; for each demonstration of violent sexual energy, she displays a dejected, spastic, naively child-like impatience. As if to contradict her character’s search for fame, she spends significant portions of time hidden from view behind a stage curtain or in a box and invites six audience members up at different times to share the stage. For every moment of phallic humour, there is a corresponding scene devoted to yonic humour – particularly memorable episodes feature a mop and a wig.

Wynazz delivers an engrossingly uncouth character that is unexpectedly endearing. I commend her for conveying so many opposites at once. It’s no wonder she was titled Best San Francisco Comedienne award in 2014.  So if you’re down with commanding femmes, audience participation, a multitude of props, and an artful mix of clowning and burlesquing, UnCouth is not to be missed!