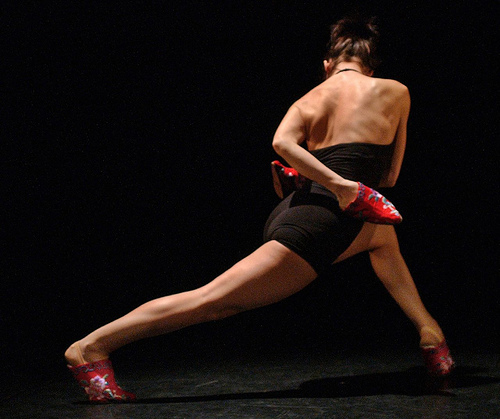 "The shoe is the foot's pimp and procurer." ~William A. Rossi, The Sex Life of the Foot and Shoe.

Unbound, created by Wen Wei Wang and performed by Wen Wei Dance, begins with the theatre dimmly lit by a single red chinese lantern hanging just above the stage: strewn across the floor are twelve tiny red slippers embroidered with flowers. These are "authentic three-inch lotus shoes from the Chinese Opera" – the kind of shoe once worn by Chinese women whose feet were broken and bound so as to remain unnaturally small and dainty. The history of footbinding is steeped in cruelty, classism, and eroticism, and because the lotus shoe is so culturally and politically charged, it creates an unsettling ambiance when used in a dance performance. One wonders what is being celebrated – beauty or cruelty, repression or liberation?  On a symbolic level Unbound is firmly anchored in an erotics and mythology of feminine beauty.

As a company, Wen Wei Dance draws on traditional Chinese dance, modern, and ballet.  A variety of cultural influences are also apparent in the symbol of the shoe: the lotus shoe is obviously of Chinese extraction, but the crimson lights used for illumination suggests the red light districts of many cultures, and the red shoe recalls the many magic shoes of Western myth – for example the red-hot iron slippers used to punish a wicked step-mother in the Brothers Grimm. The shoe also has obvious import in relation to the discipline of dance itself: dancers have famously endured great pain in order to achieve feats of strength and grace.

If the conceptual and cultural foundations of Unbound are complex, its execution is no less rich.  Six performers, male and female, dressed in white tunics and tight black shorts perform with powerful atheleticism and exceptional subtlety.  They enter the stage individually and begin to gather up the shoes accompanied by thunderous drums and clamourous chimes. Some of the performers place the tiny shoes on their hands, some on their feet, others remain barefoot. Those who are shod look like strange hooved animals. As the dancers enter, they begin to tumble and twist across the stage, windmilling their arms, rolling and rising onto their shoulders, spinning up off the floor using muscular motions of the hips. Their lunges and twists resemble Tai Chi or other forms of Chinese Martial arts – they are strong, refined, and focused with wicked intention.

As an ensemble performance, Unbound is skillfully crafted: dancers are always in motion and their patterns are always changing. At times they perform in unison, but more often they work in asymettrical sets, weaving complex shapes around each other in ones and threes, in matched pairs, in triads and opposing duos.  Every regrouping creates a new dynamic on the stage: two men and one woman dance in a tangle of limbs, suggesting a love triangle with dark, agressive undertones.  A male and female pair entwine and roll acoss the stage: he lifts her with a raised arm, his hand buried in a red slipper.  Two women lie on the stage with raised, slipper-shod feet.  Their movements are seductive – yet when they stand and exit with mincing steps, they do so head-to-head, touching brows together like a pair of conjoined siamese twins. There is a raw sexuality to the piece that belies the delicate restraint of the dancers' movements, and yet every series of gestures is layered, so that pleasure and pain; love and anger; attraction and repulsion occur simutaneously.

Unbound is equally steeped in absurdity: one male dancer enters the stage by crawling, with red shoes on his hands and feet, and a fifth in his mouth -- he is a frightening and strangely hobbled creature, beaked and blind, with a delicate step. Women bend at the knees and ankles, walking deftly and yet awkwardly in the three inch shoes. Another time, three men parody the women's movements: they rise, fall, and finally tiptoe daintily on the balls of their feet as they learn how to move in the restrictive slippers.

The lighting  is an equally dramatic fusion of extremes: when the dancers divest themselves of shoes, laying them down is pairs, squares of ruby light open up around the shoes.  Yellow latticed circles of light, like the shadows cast by the sun through bamboo screens, form areas in which to dance, and thin latteral slices of light cut the air, catching in motes of dust.  The total effect is both lurid and hushed.  Red light against the blackness creates a steamy, hellish aura.  Yellow light is like sunlight breaking into a dark enclosed chamber – military barraks or a temple.

Unbound is a finely crafted, exquisitely polished piece of performance. Yet for all the discipline and precision of the dancers, it is a work full of vitality and exploratory curiosity. The landscape that dancers create with their bodies is both compelling and disturbing in how it blends creativity, beauty, and brutal restraint. Wen Wei uses this ambiguity to great effect, tapping into the mythic resonance of the lotus shoe as an object of oppression and desire.

Unbound was performed at the Kay Meek Centre on October 16th as part of Dance in Vancouver. No remainng performances but you can find out more here.