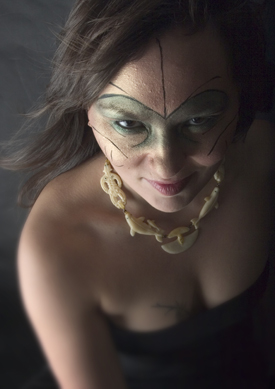 There it is again. Vancouver. Spread across a huge screen that is the backdrop for *Two Night Stand*: an interdisciplinary performance, part of the current "Vancouver International Dance Festival":http://www.vidf.ca/index.php?option=com_frontpage&Itemid=1, it features four musicians, one singer, two butoh dancers, and a beautiful time-lapse film by Clancy Dennehy.

In recent years, local theatre and dance artists have turned their gaze on the city and found new ways to transfer aspects of its elusive nature into the concentrated frame of a theatre. The film in *Two Night Stand* begins with the downtown skyline and the restless, jittery motion of an army of building cranes nervously jerking their heads left, then left, and then right, as if anticipating some threat—an anti-development protest? The sudden financial insolvency of the developer (shades of Millennium and the Olympic Village meltdown)? Sibling skyscrapers watch mutely.

We zoom in on a single window. In it is the reflection of the snow-dusted North Shore mountains. And then we’re there—on the mountains—a single fir tree stands out against the sky. This is Vancouver: the constructed environment and the natural world form its dual nature. Dual but not quite separate. Each is uneasily enfolded within the other. While the city continues to encroach upon the wilderness that makes our urban setting so unique and unlikely, the harsh topography that lies beyond the mountain ridges puts a break on our appetite to colonize every part of nature, to turn all unspoiled turf into backyards for two-car garage, gated communities. We are urbanites enjoying the benefits of a globalized shopping mall. We are nature seekers strapping on our hiking boots for a weekend climb. We are the addicted homeless looking for a shelter, trying to escape the wrath of ‘nature’. Obviously there’s no real ‘we’ here, just a composite of individual dreams and fears. But rich or poor, indoors or out, this composite is part of the mental map of Vancouver. It often becomes manifest in local performance as the meeting of two opposing forces, two people trying to shake hands while keeping their fingers crossed.

This tension increasingly finds expression on our stages. Aaron Bushkowsky’s recent play _Soulless_ (Rumble Productions) turns a cynical eye on the Real Estate driven ethos of the city: sealing the natural environment off from the comfort of the gold-plated condo, a developer named Bob uses a balcony view of nature as a kind wallpaper to help sell domicile as ‘lifestyle’; in the street, however, he can’t help bumping into Claire, a homeless woman whose former squat has been erased by the new development. James Fagan Tait’s adaptation of _Crime and Punishment_ (neworldtheatre) took twenty five performers, trained and un-trained, and presented them as a sort of cross-section of the city demographic; putting special focus on the Downtown Eastside performers, that hard-hit part of the city became the psychological locus of the piece. Last year, MACHiNENOiSY Dance toured the aptly named _Vancouver vs. Vancouver_ to Europe, a show that cops moves from the local All-Star Wrestling circuit and plays them off against a number of more disturbingly violent motifs, including infanticide, suicide, and the psychic violence that the theatre spectacle itself can inflict through careless portrayal of harrowing subject matter; in Vancouver vs. Vancouver ‘nature’ was present only in its absence, as the white plastic dance floor, the red and white uniforms (evocative of the Canadian flag), and the interior world of performers Delia Brett and Daelik became another seal against the unruliness of that other world out there, a world the performers seem to be cut off from. In these shows and others, local artists confront the split or dual personality of the city.

The film in *Two Night Stand* sets up this tension and attempts to dissolve it: city becomes mountain and vice-versa. The performers at their instruments, or on the marly dance floor, do likewise. While the film gives a narrative structure to the improvisations, the performers offer corporeality: they are the protagonists in this exploration of architectural and enfleshed local identity. So who is the antagonist? As always in musical improvisation the antagonist is the unknown, the potential of abysmal incoherence, the fear that despite all efforts things won’t come together. Instead of musical interplay, we might end up with seven isolated ‘noises’, seven people who fail to communicate with one another.

This danger is almost immediately overcome thanks to a very particular kind of selflessness on the part of the performers. While each is a maestro in their own right, they give up status with ease; they even surrender their identity to one another and take on aspects of each other. Drummer Dylan Van Der Schyff, with licked finger on the skins, somehow manages to coax cello notes out of his kit. Cellist Cris Derksen feeds her instrument through a wah peddle evoking electric guitar psychedelics. Tony Wilson on guitar picks piano-like notes off his strings. Pianist Lee Pui Ming abandons his keys and performs a drum solo on the frame. In this way, like the mountain reflected in the window, the musicians inhabit one another’s territory. They trade beings through their instruments. Disciplines are blurred, but not abandoned: each re-inhabits his or her own identity; but these identities are not as discreet as they seemed at first. Some part of each resides within the other.

Van Der Schyff is a particularly polyphonic drummer. He speaks for himself, and with the borrowed voices of the other musicians. He’s one of the most intelligent and inspiring improvisers you can find. Texture, melody, and his astonishing ability to use the density or sparseness of his playing to compress and expand space become a defining feature of the evening. He does all this with a generosity that is met by the ensemble, each member a unique and inspired talent. (If you ever get the chance to see Van Der Schyff, sit close—he’s a dance performance unto himself; his movement is functional in the sense that everything he does is for the purpose of creating sound, but he’s a study in motion for sure.)

Dancers Barbara Bourget and Jay Hirabayashi are at a slight disadvantage when it comes to all this identity switching. Their primary instruments are their bodies, and most often these bodies do not vocalize. But they do absorb and reverberate. They respond to sound’s special ability to envelop. A moan from the cello is incorporated into the body and in butoh fashion sculpted and twisted like drying clay. The two dancer bodies become a locus for sound. And in turn they become batons, in the hands of an unseen and unpredictable maestro, for the musical ensemble to follow. Or maybe the maestro is Dennehy’s film.

Inuk throat singer Tanya Tagaq gets fully into kinetic foreplay with Bourget and Hirabayashi. Her physical style is of a different mode: where the butoh dancers are loosely dressed and plastered in white-cake, Tagaq is sleek in a tight, mid-thigh tube dress, her skin radiant. But she finds a way to take some of the butoh into her body as well. Mostly she offers herself as a sexualized, lounge-singer-meets-designated-mourner, but there’s a sympathetic exchange of grief and torture between her drones and wails and the contortions of the dancers.

And then I start to really notice the architecture of their bodies. And the architecture of the drum kit, the piano, the cello and the guitar. With the musicians it’s a case of bone and flesh interacting with wood, plastic and metal structure. With the dancers and singer it’s their own bodies that are the structures, and these structures become sites of loss. So back to the film: an empty construction site, a giant hole in the ground. Something is being erected there. But for the moment the sense of something removed is greater. The dancer bodies continue in the foreground. They have become a living metaphor for what is happening on screen. And while the film is playing something recorded in a time-lapsed past, the dancers are performing construction and loss in the continuous present. They are giving the city its destruction and renewal in real-time.

It also occurs to me that Bourget and Hirabayashi have been foregrounding the city in their work for years. In fact, as Artistic Directors of Kokoro Dance, they’ve been taking themselves and their audiences out of theatres and into sites as diverse as Wreck Beach and Oppenheimer Park. They insist on becoming fiercely vulnerable to the here-and-now of the city, whether that means literally dragging themselves naked through the rock, sand and salt of Wreck Beach, becoming signal fires for the atrocity of human exploitation in the inner city, or being emotional carriers for the confluence of musical and visual factors in *Two Night Stand*.

I left *Two Night Stand* feeling like I understood my city a little better. The sheer scale of the projection screen (about 40’ x 40’) offered both microscopic views and an epic sweep. There was both a tragic feel (possibly due to the darker notes of the cello and the mournful intonations of Tagaq), and a sense of possibility (blue skies and birds flashing past like an origami cloud stream). The beauty of being in a theatre and not on site is that you can draw all of your attention to what the artists have put on display. In *Two Night Stands* the various identities are presented as such, then intentionally blurred to create a metropolitan presence that is greater than its parts.