Truth / Dare: Nothing is Precious So Dance Your Face Off 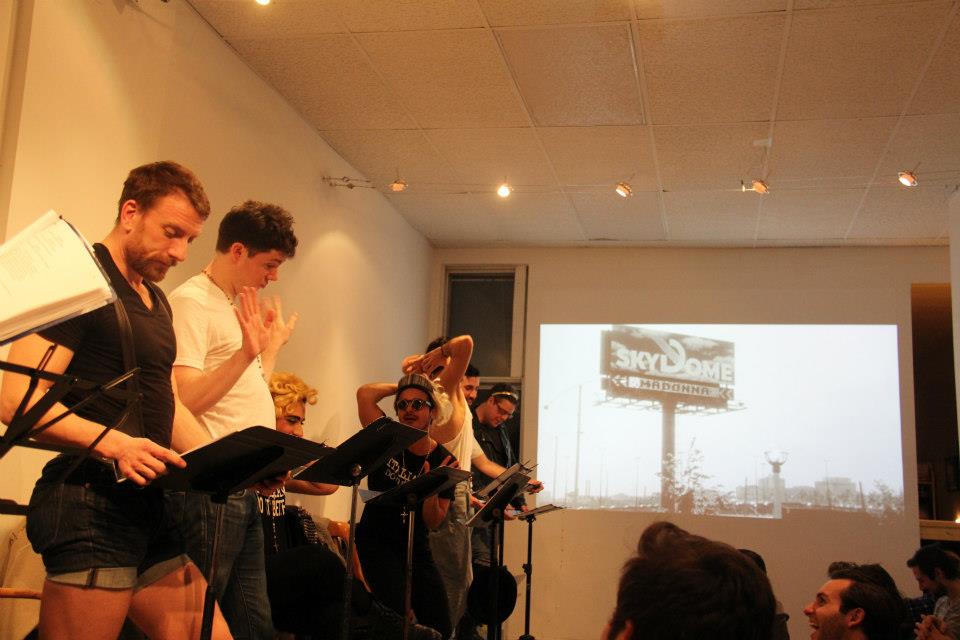 Truth / Dare - check it out if you are that brave!

The lights go down and Madonna's iconic Like a Prayer blasts over the speakers. Salvatore Antonio, in impeccable Madonna-inspired makeup screams out, “Get interpretive, bitches!” and the audience is on their feet; we obey his orders. At this point, we're about half-way through Truth/Dare, a tribute to the iconic documentary of Madonna's 1990-91 tour, and everyone is having a blast, lovingly milking the camp for all it's worth. I don't even like Madonna, so it took me half a song to realize that yes, I do in fact know the words to Papa Don't Preach, and oh hey, yeah Madonna did sing it, and maybe she should just keep her baby... right?

Truth/Dare isn't just a send-up to the superstar; it's self-aware and sometimes biting but never cruel to the diva muse. Antonio and his creative partner, Adamo Ruggerio, clearly have reverence for the material. The two perform the role of Madonna (verbatim from the transcripts of the documentary) interchangeably, while a cast of six back them up as over 30 interchanging characters. It would be easy to call this impersonation, though its far more than that. The authenticity of the original footage seeps through in the various roles and takes on a constantly present self-awareness, especially when the men get into the scenes with Madonna's machismo Italian brother, her waspy step-mother and blissfully unaware father. And the chorus performs her poor, much maligned assistants, technicians and producers to my techie heart's content (I've felt their pain). I know nothing of Madonna or the documentary, and while I wasn't laughing as hard as those intimately familiar with it, I got the inherent humor of the situations. This motley crew has the presence and whereabouts to appreciate what came before them, and to pass it forward to others so they can understand their inspiration, which seems to be something of the essence behind Truth/Dare. And sometimes, it's just cheesy and fun- these guys just really want to scream “Ch-ch-ch-ch-ch!” at the top of their lungs, and that's perfectly okay.
It's not all deep, but it does get a little meta from time to time. I couldn't help finding some of the selections Adamo Ruggerio read about celebrity to be interesting- since he played Marco on Degrassi: The Next Generation for about seven years when he was a teenager and can probably speak about the culture of celebrity better than the average struggling-artist can. In his performance he self-consciously plays with his blonde wig, pulling his hair up behind his neck in that way celebrities seem to when they are trying to act like they aren't being conscious of their own actions- all while acting casual in completely non-casual situations. Antonio steals the show more than a few times whenever he breaks into a prayer circle, deepening his voice and hacking out the hoarse words of the pop diva as she prays for luck in Detroit, Toronto and LA. With his blonde wig and dramatically painted face he's not only referencing Madonna but the inspiration before her- the queen of bombshells, Marilyn Monroe. The spirit of Madonna is in him, and it is holy.
And what would a show in Toronto these days be without a mention of our fascist government? This is not Ford's government: this is 1991, when the police almost arrested Madonna for simulating masturbation at her Skydome concert. The chorus explodes in electric cat calls as old footage of CTV's Christine Bentley narrates the event, eliciting their hisses, boos and insults. The whole incident is interpreted with pure glee. The chorus, especially during this part, is fabulous- just as they should be.
It's a fun 90 minute dance-party-performance-interaction. If you don't want to dance, you probably shouldn't go, but if you want to loosen up, get a little meta, and have a genuinely fun time, check it out this Friday and Saturday at Videofag. It's the perfect way to start a night out, and you can always hit up a club afterwards, serenade the CN Tower, curse our government and then dance the night away.
Check back later this weekend for the rest of my adventure, where I interview the owner/operators of Toronto's newest performance space, and the hosts of this event, Videofag!
Review of Truth/Dare: A Dramatic Reading With Dancebreaks
By Salvatore Antonio and Adamo Ruggerio
Videofag, 187 Augusta (Kensington Market)
December 6th, 7th, 8th. Doors at 8pm, show at 8:30 (or so)
$10 at the door
By Claire Hill
Tags:
videofag