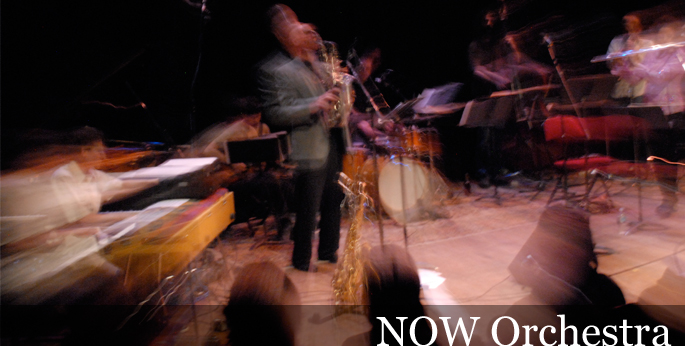 Coat Cooke’s “Music Is the Invisible Art” and Stefan Smulovitz’s “The Right Amount”: A Night of Structured Improvisation

Often, we are reminded how much our friends love us when they support us during difficult times. This devotion can transcend the temporal world and their spirit can inspire us to create. On April 13th, the Orkestra Futura treated the audience at the Roundhouse to an emotionally laden night of dynamic music. The evening started with Coat Cooke’s “Music Is the Invisible Art” and closed with Stefan Smulovitz’s “The Right Amount.” Both Coat and Stefan’s compositions were inspired by the recent passing of two close friends.

Coat Cooke’s “Music Is the Invisible Art” is, at its heart, an exploration into structured improvisation. The orchestra is divided into a series of duets, with each instrument playing off its partner.  Throughout the composition, Coat’s conducting was both subtle and effective.  Clearly, his communication with the ensemble was worked out well before hand during the rehearsals.  All of the musicians knew where to turn when they needed direction.  The improvisation was designed in musical segments or “circles” where each member could look to Coat to establish which segment they were on, who was playing, and when to transition.  A major strength of Coat’s approach to conducting is that the players have great freedom to improvise and find their voice within the composition.  Equally, there was enough time given to explore the work as a unit, where all members could collaborate and create a layered and textured sound.  Composing such a complex piece of music within the apparent paradoxical genre of structured improvisation is challenging and bold undertaking. Coat’s vision is realized as “Music Is the Invisible Art” explores the limits of sonic possibilities, especially at it’s close. The composition is structured like a gathering storm, and has the emotionally intensity of a requiem. It culminates with the vocalists chanting like they are in death throes. Layered on top of these vocals is Lee Hutzulak manipulating the contact mikes so they sound like bombs were dropping while trombonist Brad Muirhead produces a machine-gun volley. These diverse sounds remind us that we must fight to stay alive, that nothing is given that can’t be taken away.

Tom Cone, a Vancouver playwright and librettist, inspired many in the Vancouver art community. On March 25th – his 65th birthday – Tom received the inaugural Mayor’s Arts Award for Lifetime Achievement.  Unfortunately, Tom succumbed to cancer on April 5th. His passing leaves a big void as he was instrumental in both pushing the boundary’s of art and fostering collaboration between artists. At the ceremony honouring Tom’s achievement, Tom approached Stefan and asked him how the orchestral arrangement of Tom’s piece “The Right Amount” was progressing. As was so common with Tom, his gentle encouragement motivated Stefan to complete this touching piece. If Tom were able to see the performance, he would have been moved like many in the audience.

The reverence and humility each member approached their craft was evident throughout the performance.  The groove-based opening set the tone for the vocalists. They worked together to build the story, and through their collaboration, created a narrative that had many layers. DB Boyko’s haunting line “I noticed myself and felt ashamed” brought a certain heaviness to the composition, enabling Coat on saxophone and violinist Jesse Zubot to close the piece with tender, heart-wrenching notes. So often during the night, the musicians pushed the boundaries of their instruments. The final notes of Stefan’s composition, though, were so poignant that immediacy of Tom’s passing welled up in the audience. This evening was a fitting legacy to what Tom valued: passionate collaboration and pushing the limits of what art can be.

“Music Is the Invisible Art” opened with four vocalists. Christine Duncan, DB Boyko, Peter Hurst and Viviane Houle harmonized well together as they sang “hoping to find life signs.” Each singer expertly used their range and their performances revealed not only a comfort on the stage, but also an ability to improvise while maintaining group cohesiveness. As the vocal piece progressed, Peter held down the tenor and baritone register, enabling Viviane to fully explore the soprano range with ease. DB and Christine rounded out the vocal quartet, giving it the body that the complexity of the piece demanded. Each vocalist had the opportunity to experiment with their own vocal style, challenging not only themselves but also the audience’s conception of a chorus. Their section finished with a haunting and rather dreamlike chant that highlighted the diverse abilities of this talented quartet.

The drummers were one of the highlights of a performance full of inspired improvisation. Initially, it seemed that two drummers occupying the same stage would overwhelm the other instruments due to the sheer volume and percussive nature of the drums. In fact, the opposite was true. Skye Brooks and Joe Poole both complimented each other and explored the diverse and nuanced sounds that the drums can produce. Skye created layers of sound by rubbing a cymbal against the rim of the snare drum. Joe also explored the range of the drum kit, creating a water-drop effect by plucking the beads under the snare drum. As well, Joe hit his drumstick against the other, which then hit the snare’s rim. This double-tap staccato, while soft, filled the room. Most striking was how each drummer understood the other’s space, and never competed for centre stage. They freely experimented with the sound envelope, but when the piece required them to take a back seat, they built a solid foundation that enabled the other improvisers to freely explore their instruments.

The rhythm section truly anchored the performance, and bassist Tommy Babin was the third member of this talented group. Often, the bassist can be overlooked. With Tommy, though, it is hard to do. With his long hair and beard, he looks like a prophet of the rhythm section, and his fingers like meat-hooks and sinewy forearms coaxing full, vibrant notes from his double-bass demand the audience’s attention. He played with a mix of youthful attack on the strings and gentle wisdom when using the bow. Throughout, Tommy’s music resonated in the room, balancing excitement with poignant moments full of longing.

Violinist Jesse Zubot complimented Tommy during their duet.  Overall, his performance was drowned in the mix.  Jesse is clearly a skilled player, and his talent was displayed when he improvised with Tommy. At times, though, his instrument seemed to be competing against the more resonant instruments.

The electronic and effects section of the ensemble had a collectively unique task.  Soressa Gardener provided vocal loops through her computer while Lee Hutzulak used contact mikes to add spacey loops and low frequency sounds to the compositions.  Soressa was paying attention to Coat’s direction but her sound, at times, was lost in mix.  Lee attacked his pedals with gusto, shaking nearly everything off his table in the process.  He was so focused on his musical contribution that he missed a few cues from Coat when it was time to transition to another section of the music.  Soressa and Lee’s combined effort contributed an additional gravitas to the project.  The singers picked up on the more unique sounds being created by the digital department and added their vocal styling to the musical milieu.  The overall result was a blurring of the lines between vocal and digital music, a tall task that all the players were willing to take on.

The horn section of Coat and trombonist Brad Muirhead was solid throughout the evening.  Coat’s jazz stylings and explosion of notes added a fun, light flare to the evening.  His work with the saxophone was simply inspired.  Coat effortlessly moved between the soprano, alto and tenor saxophone, smoothly transitioning to fill the needed range and pitch.  Whether he was taking the lead or rounding out the bass clef section of the music, the dimensionality was integral to the compositions success.   His love and joy of improvisation shone through as members of the ensemble took turns playing.  The trombone held down what Coat was playing, giving it weight and body. Brad’s respect for the other musicians was clear to see and hear.  His playing called little attention to itself, but it was invaluable in the totality of the piece.

Overall, this night was a fitting tribute to two dear friends. It was clear from how both the conductors and musicians approached the music that they were there for something beyond individual success. It was fascinating to hear how such complex compositions played by so many talented musicians could create a unifying emotional response. Most impressive was how the musicians pushed each other to explore the range of their respective instruments. Both Coat and Stefan have created unique and challenging pieces that leave a lasting impression on the listener. Through the pain of losing someone close to them, they have been able to harness the grief and produce truly moving emotionally heavy compositions. Hopefully, many more audiences across the country will be able to experience “Music Is the Invisible Art” and “The Right Amount.”